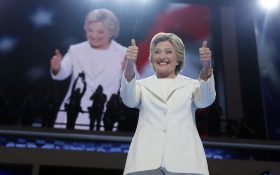 Hillary Clinton’s acceptance speech as her party’s presidential nominee was intended to be a powerful moment, a coronation that would cap off a four-day convention celebration with a show of unity and respect.

Instead, it was a disaster.

Her vanquished rivals weren’t willing to sit quietly, and loudly booed and heckled Clinton throughout her acceptance speech.

Republican leaders were quick to weigh in.

The boos & catcalls from Sanders supporters during Hillary speech at #DNCinPHL are distracting, even watching on tv. What a disaster.

It was hardly the unity moment that establishment Democrats wanted.

One of the most divisive and distrusted figures in American politics took to the stage to convince voters that she, rather than Republican rival Donald Trump, can bring a deeply divided nation together — but last night’s fiasco only showed voters that she can’t even bring her own party together.

Trump’s tweeted response to Clinton’s speech captured his pitch to those voters. He slammed the former secretary of state as an ineffectual defender against terrorism and blasted her judgment.

Hillary's vision is a borderless world where working people have no power, no jobs, no safety.

Despite her decades on the public stage, many know Clinton as much from her scandals as her resume, a fact Clinton confronted head-on: “I get it that some people just don’t know what to make of me, so let me tell you.”

For Clinton, stakes were high: A loss to Trump would not only end Clinton’s political career, it could be a devastating coda to her and her husband’s political legacy and leave the Democratic Party weaker than it has been in a generation.

But former President Bill Clinton seemed almost too relaxed. During the speech, cameras appear to have caught the former president nodding off.

Resentment towards Clinton had been boiling over throughout the convention, with hundreds of attendees heckling during her address others wearing neon shirts in protest. One held a bright red sign that stood out among the campaign placards: “Keep your promises.”

Outside, thousands protested and vowed to never vote Clinton.

In response, they made sure television audiences heard them instead.

Those hecklers are pretty loud. And persistent. One yells, "Never Hillary!" before being backed back into the hallway.

What did you think of Hillary Clinton’s speech last night? Train wreck, or unifying moment? Comment below.