Could this secret cost Hillary everything? - The Horn News 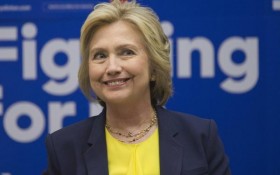 The escalating confrontations between supporters of Vermont Sen. Bernie Sanders and those of former Secretary of State Hillary Clinton reached a new level when brawls erupted in Nevada this weekend.

And it underscores a dark secret that the Democratic party and the mainstream media are largely ignoring — Democrats are refusing to unify under Clinton.

In fact, the millions of Democrats and independents who have flocked to Sanders feel so cheated by Clinton and the Democratic machine, they’re unlikely to ever support her.

If Clinton doesn’t get their votes — or if some carry through on promises to support her rival, Donald Trump — Clinton’s campaign is effectively sunk.

“Many supporters of Sanders are upset with Clinton and her supporters for what they believe is a primary process rigged in her favor from the beginning, especially because of superdelegates,” according to a report in the Free Beacon. “Somehow, the mainstream media managed to overlook this.”

The Las Vegas Sun reported on how serious the fissure was during the Nevada Democratic Convention.

“Several dozen Sanders supporters flocked to the front of the convention room, shouting ‘this is fixed’ and ‘no confidence’ at party officials leading the convention after the vote,” according to the paper. “Others hurled insults specifically aimed at party leadership.”

“One woman in the front row on the Clinton side of the room and wearing a Clinton T-shirt yelled ‘call the police!’ and ‘arrest them!’ at the crowd of Sanders supporters,” The Las Vegas Sun article said, and there were bottles and chairs hurled by opposing groups.

The problems haven’t been limited to Nevada. Earlier this month in Maine, Congressman Barney Frank, faced boos and chants of “sellout” from Sanders supporters when he tried to make a speech on behalf of Clinton.

The fracture has run so deep, even a notable Clinton celebrity supporter, actor Wendell Pierce, recently got into brawl with Sanders backers in Atlanta.

All this increasing infighting could cost the Democrats the White House in November.

An NBC News poll shows Clinton beating Trump by only three points — essentially a statistical tie — after she had previously enjoyed large leads.

That’s a rapid slip, and could provide clear evidence that not all of the Democratic party is behind her.

“The biggest political story that the media wants to ignore is the bitter split in the Democratic Party, as Sanders supporters refuse to capitulate to Hillary Clinton’s purported inevitability, while the party establishment steamrollers the Big Fix in Philadelphia,” The American Thinker writes. “The ingredients for a repeat of the disastrous 1968 Democratic National Convention in Chicago are being assembled.”