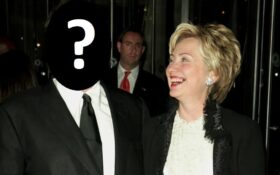 And he’s set to be extradited soon.

Disgraced Hollywood mogul Harvey Weinstein was convicted last year of rape and sexual assault in New York state. Before his stunning fall from grace, he was an outspoken Hollywood liberal that raised over $1.4 million for Hillary Clinton’s failed 2016 presidential campaign.

Now he “faces 11 counts in California, including rape and sexual battery involving five incidents that allegedly took place between 2004 and 2013,” the cable news channel reported. “If convicted, he faces up to 140 years behind bars.”

In 2020, Hillary Clinton defended her longtime association with Weinstein.

“How could we have known?” Clinton told The Hollywood Reporter. “He raised money for me, for the Obamas, for Democrats in general. And that at the time was something that everybody thought made sense.”

“This process will eliminate the need for a preliminary hearing which is kind of a minitrial like we saw in the OJ case: there was the trial before the trial,” criminal defense attorney Troy Slaten told Fox News.

It’s just the latest in a long series of legal problems for the movie mogul that became the main figure of the #MeToo movement.

In New York, his lawyers are demanding a new trial, arguing in court papers last week that the prosecution that put him behind bars was buoyed by improper rulings from a judge who was “cavalier” in protecting Weinstein’s right to a fair trial.

In a 166-page brief filed with a state appellate court, Weinstein’s lawyers took repeated aim at Manhattan Judge James Burke, arguing that he swayed the trial’s outcome with repeated rulings favorable to prosecutors — including a decision allowing additional accusers to testify about allegations that never led to criminal charges.

Weinstein’s lawyers also challenged Burke’s refusal to remove a juror who had written a novel involving predatory older men, as well as his decision to allow prosecutors to have an expert on victim behavior and rape myths testify while rejecting testimony on similar subjects from defense experts.

“Mr. Weinstein had a right to a fair trial by an impartial jury,” lawyers Barry Kamins, John Leventhal, and Diana Fabi-Samson wrote in the brief.

“The trial court should have exercised the utmost vigilance in protecting this most important right of the defendant,” they wrote. “Instead, the trial court was cavalier in its obligation to safeguard this right and the consequences for Mr. Weinstein were disastrous.”

Weinstein, 69, was convicted in February 2020 of a criminal sex act for forcibly performing oral sex on a TV and film production assistant in 2006 and rape in the third degree for an attack on an aspiring actress in 2013.

He was acquitted of first-degree rape and two counts of predatory sexual assault stemming from actor Annabella Sciorra’s allegations of a mid-1990s rape — testimony that his lawyers said Monday was so dated it should never have been allowed.

Burke sentenced Weinstein to 23 years in state prison, which his lawyers argued Monday was “unduly harsh and excessive.”

His extradition to face trial in California had previously been delayed twice because of the pandemic. Weinstein tested positive for the coronavirus shortly after arriving at the maximum security Wende Correctional Facility near Buffalo last spring.

Weinstein maintains his innocence and contends that any sexual activity was consensual.

Weinstein’s lawyer said at the time of his conviction that he was “somewhat flabbergasted” by the verdict but that he remained “cautiously optimistic” that he could prevail on appeal. They filed a notice of appeal in April 2020. Arguments are not expected for several months.

A spokesperson for the Manhattan district attorney’s office declined to comment on Monday’s filing, saying: “We will respond in our brief to the court.”

Douglas Wigdor, a lawyer for several of Weinstein’s accusers, said in a statement that the appeal “is a desperate attempt to undo a fair trial overseen by Judge Burke and the findings of a well-reasoned and thoughtful jury. We are confident the appeal will not alter his conviction and sentence.”