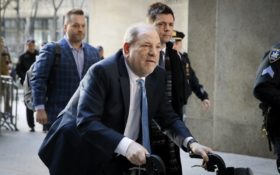 Top Democratic donor and medial mogul Harvey Weinstein was sentenced Wednesday to 23 years in prison, pleading for mercy as his accusers said his punishment in the landmark #MeToo rape case was long overdue.

After two of his accusers confronted him again in a Manhattan court, the 67-year-old former Hollywood mogul broke his courtroom silence to say he felt “remorse for this situation.” But he also argued that men are being accused of “things that none of us understood.”

“Thousands of men are losing due process. I’m worried about this country,” he said in a calm but creaking voice. “I’m totally confused. I think men are confused about these issues.”

Weinstein, who has been accused of violating scores of women, was convicted last month of raping a once-aspiring actress in a New York City hotel room in 2013 and forcibly performing oral sex on former TV and film production assistant Mimi Haleyi at his apartment in 2006. He faced a maximum of 29 years in prison.

The conviction at the landmark #MeToo trial was the first criminal fallout from a raft of allegations that the Oscar-winning movie producer used his clout to lure women, sexually assault or harass them and then silence them.

“Although this is a first conviction, this is not a first offense,” Judge James Burke said before revealing the prison sentence. Weinstein faced a maximum of 29 years.

Both of the women Weinstein was convicted of assaulting spoke in court prior to his sentencing about the impact he had on their lives, and the empowerment they felt during the trial when they testified against him.

“Rape is not just one moment of penetration. It is forever,” said the 2013 rape accuser, who recalled a moment during the trial when she left the witness stand in tears and then could be heard screaming from an adjacent room.

“The day my screams were heard from the witness room was the day my voice came back to its full power,” she said.

Asked later about her reaction after the sentence, the anonymous accuser wiped her eyes, raised her arm and nodded her head.

“I believe that if Harvey Weinstein was not convicted by this jury, it would happen again and again and again,” Haleyi said as she broke down in tears, saying the 2006 attack scarred her deeply, made her rethink her career in the entertainment business and left her feeling paranoid and afraid of retaliation.

Weinstein, who has maintained that any sexual activity was consensual, showed no visible reaction to the sentence.

Beforehand, he gave a rambling speech that touched on his past charitable fund-raising, his filmmaking career and a pledge that his new “mission is to help people.” He said his “empathy has grown” since his downfall.

He said he had thought he had good friendships with Haleyi and the rape accuser, who exchanged warm emails with him after the alleged attacks.

The executive behind such Oscar-winning films as “Shakespeare in Love” and “Pulp Fiction” became Exhibit A for the #MeToo movement after years of whispers about his alleged behavior burst into public view in The New York Times and The New Yorker in 2017.

More than 90 women, including actresses Gwyneth Paltrow, Salma Hayek, and Uma Thurman, eventually came forward to accuse Weinstein of sexual assault and sexual harassment. The takedown energized the #MeToo campaign of speaking up about sexual assault and holding perpetrators accountable.

Time’s Up, an organization created to fight sexual harassment in the wake of #MeToo, on Wednesday hailed the women who testified against him for “the impact that they have had on our culture at large.”

Weinstein lawyer Donna Rotunno bristled at his sentence, saying the judge and jury had “caved” in a #MeToo and media atmosphere where Weinstein “really never had a fair shake from day one.”

“We were looking for fairness, and we didn’t get it,” Rotunno said.

Weinstein was sentenced a week shy of his 68th birthday, and his lawyers argued that a lengthy prison term would, in effect, be a life sentence. They sought a five-year sentence, the mandatory minimum on the more serious of the two charges he was convicted of, citing his age and frail health.

Weinstein used a walker throughout the trial and arrived at the courthouse Wednesday in wheelchair because of back problems from a car crash last summer. He has a condition that requires shots in his eyes and last week had a stent placed to unblock an artery.

Prosecutors said the top Democratic donor and Hollywood titan deserved a harsh sentence that would account for wrongdoings that date back decades.

Weinstein was convicted on two counts: criminal sex act and rape in the third degree. He was acquitted of the more serious charges against him of first-degree rape and two counts of predatory sexual assault.

Now that Weinstein has been sentenced, his lawyers can move forward with a promised appeal. He also faces rape and sexual assault charges in California, where he could get up to 28 years in prison if convicted. Three more sexual assault allegations are under investigation there.