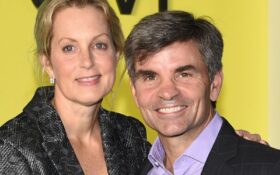 “Let me tell you about the very rich. They are different from you and me. They possess and enjoy early, and it does something to them,” wrote the novelist F. Scott Fitzgerald almost 100 years ago. “Unless you were born rich, it is very difficult to understand.”

He was right that America’s economic and political elite are hard to understand—especially when it comes to their views of young children and sex.

Jeffrey Epstein, Ghislaine Maxwell, and every celebrity or politician in their thick, black book prove it over and over.

Another rich and famous individual just brought this truth out of the shadows and into the light. It’s an associate of Bill and Hillary Clinton, and someone married to one of the top figures in American journalism—who just advocated showing pornography to children as young as 15… and she did it alongside a Hollywood star and a rich Democratic Party donor.

Ali Wentworth is married to George Stephanopoulos, Bill Clinton’s former communications director and the host of ABC’s nightly newscast, as well as Good Morning America. They have two teenage daughters together: Elliott Anastasia, who is 17, and Harper Andrea, 15.

Wentworth said she’d like to watch pornography with them.

On a podcast last Thursday, she said that parents “can’t stop” children from watching pornography, “so I am going to watch it with them.”

Wentworth encouraged parents to watch hardcore pornography with young teenagers and talk about specific sex acts, even the shape of the performers’ vagina.

“You could also say, ‘People use this in the privacy of their own home because that’s how they pleasure themselves…but this is a performance,’” she suggested.

Why would Clinton associates and Hollywood stars tell parents to use the same tactics that predators use to molest kids?

“You can’t stop them. You certainly can’t stop them,” Wentworth told parents, who might think it’s smarter to install adult content controls or use comprehensive porn-blocking services like Covenant Eyes.

Wentworth insists her interest in showing her teenage daughters pornography is purely educational. But it may also be illegal.

“It is illegal for an individual to knowingly use interactive computer services to display obscenity in a manner that makes it available to a minor less than 18 years of age,” according to the U.S. Department of Justice.

Clinton’s team insists he never had sex with an underage girl and never saw anything illegal the 26 times he flew on Epstein’s private jet.

Interestingly, George Stephanopoulos also has a connection to the billionaire pedophile, who died in prison last year under dubious circumstances.

Stephanopoulos attended a party that Jeffrey Epstein threw in honor of Great Britain’s Prince Andrew, who has personally been accused of molesting underage girls. The prince came under even more fire when he issued a series of bizarre “denials” that the British public didn’t buy.

During the pandemic, reported cases of child molestation increased by 106 percent, according to the National Center for Missing and Exploited Children.

Wentworth made her comments during a podcast with Will and Grace star Debra Messing and Mandana Dayani, an Iranian-born businesswoman who earned millions in the fashion world before co-founding a nonprofit called “I am a Voter” with the head of the gun control group Moms Demand Action.

The podcast is just the latest example of the ways America’s “elites” promote destructive behavior for the rest of us.