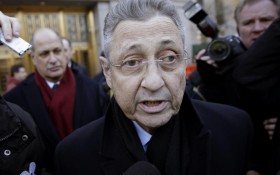 Former New York Assembly Speaker Sheldon Silver was convicted Monday in a $5 million corruption case that took down one of the state’s most powerful politicians and stunned a capital that had become accustomed to scandal.

Silver is a longtime friend and political ally of Democratic presidential frontrunner Hillary Clinton, who will now have to answer questions about their relationship and the hearty endorsements she gave Silver over the years.

The jury verdict came after a three-week trial in which federal prosecutors claimed that the 71-year-old Democrat traded favors to enrich himself and then lied about it. The defense countered that the government was trying to criminalize the longtime routines of Albany politicians. His sentence could be as long as 20 years.

Even in a state capital where more than 30 lawmakers have left office facing criminal charges or allegations of ethical misconduct since 2000, the case against Silver was an extraordinary turn. An assemblyman since 1976, Silver was one of Albany’s most storied political figures, a consummate backroom operator with the power to decide the fate of legislation single-handedly.

His prosecution was a marquee case in Manhattan U.S. Attorney Preet Bharara’s quest to clean up a state government he has called a “cauldron of corruption,” an effort that has led to the ongoing corruption trial of Republican state Senate leader Dean Skelos.

With Monday’s verdict, “Sheldon Silver got justice, and at long last, so did the people of New York,” Bharara, who had watched from the courtroom audience, said in a statement.

With the conviction, Silver automatically loses his Assembly seat. He had kept it while fighting the charges, although after his arrest he was stripped of the speakership he had held since 1994.

“Today, justice was served,” Gov. Andrew Cuomo, a Democrat, said in a statement. “With the allegations proven, it is time for the Legislature to take seriously the need for reform. There will be zero tolerance for the violation of the public trust in New York.”

The leader of the Assembly’s Republican minority, Brian Kolb, called the conviction “a clear signal — again — to Albany: Enough is enough.” Current Speaker Carl Heastie, a Democrat and Silver’s successor, said he would “continue to work to root out corruption and demand more of elected officials when it comes to ethical conduct.”

After Silver’s arrest, the Legislature passed modest changes, including a requirement that lawmakers disclose more about their private income. But so far, lawmakers have balked at significant reforms, such as term limits, restrictions on legislators’ outside income, tighter campaign finance limits and tougher enforcement of ethics rules.

Prosecutors had argued that they proved Silver traded his office for riches: $4 million in kickbacks from a cancer researcher and real estate developers. Prosecutors say Silver earned a million dollars more through investments.

Silver did not testify and called no witnesses. Dr. Robert Taub told jurors he steered numerous patients with asbestos-related cancer to Silver’s law firm, enabling the legislator to pocket $3 million in referral fees. Meanwhile, testimony and evidence revealed, Silver caused $500,000 in taxpayer funds to go to Taub’s research projects and helped his son and daughter get a job and an internship.

Meanwhile, Skelos and his son have been on trial in another Manhattan federal courtroom. Skelos is charged with badgering companies reliant upon his legislative clout to provide over $300,000 to his son.

Skelos and Silver were among a group dubbed the “three men in a room” in Albany, a nod to the longstanding practice of legislative leaders and the governor negotiating key bills behind closed doors. The day before Silver’s arrest, Cuomo referred to Skelos, Silver and himself as the “three amigos.”

In a measure of Silver’s clout, he helped persuade Cuomo to disband an anti-corruption commission investigating Silver’s financial dealings and those of his colleagues.