Clinton mistress: I have a shocking secret - The Horn News 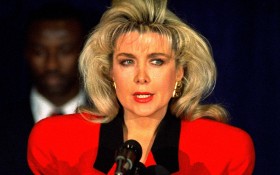 The one-time mistress of former President Bill Clinton is back, and she claims she has a bombshell secret that could even threaten her life.

Gennifer Flowers, once reviled by the Clinton camp as nothing more than a bimbo, recently told WND’s Aaron Klein Investigative Radio that America needs to take another look at the Clinton’s scandal-plagued history.

Especially now that Hillary Clinton is seeking the nation’s presidency.

“[Those] stories should come back up with the circumstances,” she said.

Flowers took a swipe at Hillary Clinton’s efforts to portray herself as a crusader for women’s rights, saying, “she always got things on the back of her husband.”

But the most shocking revelation from Flowers may be her claim that she keeps a safe deposit box with a shocking secret about Bill Clinton. And she believes it’s the only thing that’s kept her from harm.

Flowers said she’s struggled with whether to “make public what’s in that safety deposit box,” but believes her science has helped guarantee her safety.

“It’s something that [Bill Clinton] is aware that I have and it’s probably the reason that I’m still around,” Flowers stated in the interview, going on to say it’s her “safety net.”

Flowers continues, “…that’s part of the decision to release it or hold on to it and hope that it helps with my safety.”

To watch the interview in its entirety, click here.