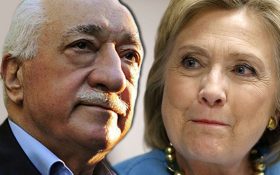 Democratic presidential nominee Hillary Clinton’s global network of donors and allies has long been criticized by opponents as a sort-of “who’s who” list full of shady bankers, dictators, and backroom power brokers.

Turkey is demanding the extradition of Muslim cleric Fetullah Gulen, who lives in self-imposed exile on a 26-acre compound in rural Pennsylvania, after accusing him of masterminding this week’s attempted coup in Turkey.

Aside from being a Turkish dissident, Gulen has also enjoyed a cozy relationship with Hillary Clinton and her husband, former President Bill Clinton, for decades. The relationship throughout the years has included numerous dinners and paid speaking arrangements.

Gulen’s followers have also been accused of funneling millions of dollars’ worth of donations to the Clinton Foundation and to Hillary Clinton’s presidential campaign.

In a press event this weekend, Gulen called Hillary Clinton a “great hope for this country.”

But according to the Turkish government, the controversial imam is the mastermind behind the failed military coup that claimed hundreds of lives this weekend. And if Gulen is not extradited, it could affect the future of a key U.S. military base on Turkish soil.

“A lawyer for the Turkish government, Robert Amsterdam, said that ‘there are indications of direct involvement’ in the coup attempt by Fethullah Gulen, a Muslim cleric who is living in exile in Pennsylvania. He said he and his firm ‘have attempted repeatedly to warn the U.S. government of the threat posed’ by Gulen and his movement. According to Turkish intelligence sources, he said, ‘there are signs that Gulen is working closely with certain members of military leadership against the elected civilian government,’” The Associated Press reported Saturday.

Gulen’s organization has denied the allegations.

This isn’t the first time Gulen has been accused of plots to overthrow Turkish President Recip Tayyip Erdogan, however. He has been put on trial in absentia at least three times in the country, and Turkey has repeatedly asked for the United States to deport Gulen back to face justice. These requests have all been denied.

In December 2015, a Turkish government-backed lawsuit was filed against Gulen that accused his organization of orchestrating human rights abuses against three men in Turkey. The lawsuit labeled Gulen’s movement, which critics had previously compared to a cult, as a terrorist organization. It alleges Gulen’s followers participated in a plot that led to the false imprisonment of three men in Turkey, targeted because they were critical of Gulen’s religious teachings.

Gulen’s spiderweb of connections extends to Congress as well. In October, USA Today reported that Gulen was accused of secretly funding up to 200 trips to Turkey for members of Congress and staff since 2008 — trips that may have repeatedly violated House rules and possibly federal law.