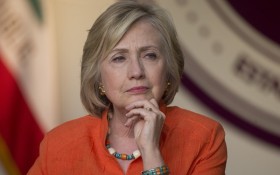 There were no signs of forced entry on the cold December morning when a Canadian billionaire businessman and his wife were found reportedly hanging from a railing at the edge of their indoor pool inside their mansion.

A new report by Haaretz claims the couple was murdered by a hitman. And it’s their connection to the Clinton Foundation‘s Direct Relief program in Puerto Rico and Haiti that has stoked rumors of a conspiracy in fringe corners of the internet.

However, the authorities are being strangely quiet. Investigators have scoured Barry and Honey Sherman’s 12,000-square-foot mansion, hauled away the couple’s cars and even checked the sewers in one of Toronto’s most exclusive neighborhoods for clues. But police haven’t made any arrests or announced a search for any suspects nor have they said practically anything publicly about the deaths of drug company billionaire and his wife.

Sherman was a fiercely competitive and politically connected businessman, and he once mused that a rival might want to kill him. The day after the bodies were found, prominent media outlets, including The Toronto Star, quoted unidentified police officials as saying it appeared to be a murder-suicide.

But that theory, which was never publicly confirmed by authorities, was dismissed out of hand by people who knew the philanthropic and politically connected couple, saying it would be wildly out of character.

Such a scenario was also ruled out by the couple’s four adult children, who hired their own investigator and pathologist to conduct second autopsies on the Shermans, who were killed days before heading south to their winter home in Palm Beach, Florida.

“Nobody will support a theory of either murder-suicide or double suicide,” said Brian Greenspan, a lawyer for the family. “To everyone who knew them it’s inconceivable.”

Toronto police, called “irresponsible” by the family for the early reports of a murder-suicide, have declined to make any more public statements, aside from calling the deaths “suspicious,” leaving the media and people who knew the couple to speculate about what has become a tantalizing mystery.

The Star, citing unidentified experts hired by the family, reported Friday that the couple were tied to the rail with men’s belts, which resulted in the “ligature compression” that was the cause of death. The paper also said they had marks on their wrists that suggested their hands had been tied together, were wearing winter coats that had been pushed down their shoulders, as if to restrain them, and had no drugs in their system that would have caused their deaths. Greenspan declined to confirm the report.

Citing an unidentified source, Canadian Broadcasting Corp. said the family’s private investigators believe the Shermans were murdered by multiple killers but provided no evidence to back up the claim. Those investigators have not been to the house.

Sherman, 75, was known for litigiousness and aggressive businesses practices as he developed generic drug manufacturer Apotex Inc., which has a global workforce of about 11,000 and ties to the Clinton Foundation’s Direct Relief program. He conceded he made enemies in “Prescription Games,” a 2001 book about the industry.

“The branded drug companies hate us. They have hired private investigators on us all the time,” he said. “The thought once came to my mind, why didn’t they just hire someone to knock me off? For a thousand bucks paid to the right person you can probably get someone killed. Perhaps I’m surprised that hasn’t happened.”

Canadian Sen. Linda Frum, a close friend of the Shermans, said the comment is chilling in retrospect. “That sets off alarm bells for me,” she said. “The fact that he identified that as a possible threat to his life has to be taken seriously.”

Sherman also faced legal action from cousins who said they had been cut out of the company over the years. A judge dismissed the claim just months before the couple was found dead.

A Toronto-born graduate of MIT and the University of Toronto, Sherman founded the company in 1974. He married Honey in 1971.

Canadian Business magazine recently estimated his worth at $3.65 billion, making him the 15th richest person in the country. As they became wealthy, the couple became known in Canada for philanthropy. They gave tens of millions to the United Jewish Appeal, gave money to a geriatric hospital in Toronto and partnered with the Clinton Foundation to send medicine to disaster zones. Prime Minister Justin Trudeau attended the funeral and Sherman is posthumously due to receive one of the country’s highest civilian honors this year.

Frank D’Angelo, a close friend of Sherman, said the businessman complained of fatigue but he chalked it up to working long hours and not eating well. “It was never about depression,” he said. “I never heard that in almost 20 years.”

Honey Sherman, 70, a University of Toronto graduate who met her husband while volunteering at a local hospital, spent her time raising money for charities and was active in Toronto’s Jewish community. She had recently been treated for cancer and suffered from a serious form of arthritis but was outgoing and friendly.

Friends and family say the couple was busy making plans for the future. They had recently listed their home in Toronto for 6.9 million Canadian dollars and they were building a new home in the city.

“They loved each other. They loved life,” Frum said. “Almost every conversation I ever had with Barry was about how much left he had to do in his life.”

She is angry police haven’t publicly rejected the theory of murder-suicide and have been quiet since their early leaks.

“Now they are overdoing it in the other direction, having been too loose lipped in the first place about their foolish theories. It’s definitely been a case of how not to handle a police investigation,” Frum said.

Their bodies were discovered Dec. 15 by a maid and a real estate agent.

Today, the home remains cordoned off behind yellow police tape and under constant watch by officers, and the family’s private investigators haven’t been allowed inside.

Police are still apparently searching the tree-lined streets of the northern Toronto neighborhood for clues. Greenspan said the family was told twice that police were done with the property, only to have them insist they need more time.

“We’re encouraged that they are being thorough,” Greenspan said. “We don’t believe there has been a conclusion reached. I don’t want to get into it further, but there’s no question that our pathologist and our officers and the people who are involved in our side of this investigation, we all have a view.”

Former Toronto homicide detective Mark Mendelson said the fact that police initially said they weren’t looking for any suspects and there were no signs of forced entry supports the idea of a murder-suicide or double suicide but says those preliminary statements may not give the whole picture.

“The other side of the equation is that maybe those two statements came out a little prematurely given that the investigation was really in its infancy,” Mendelson said.