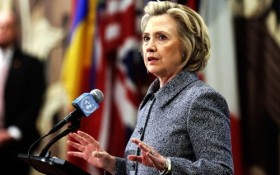 The massive Panama Papers data leak has already led the prime minister of Iceland to step aside, and has raised major questions about Russian President Vladimir Putin’s overseas fortunes.

Now it looks like the growing scandal could claim another victim — current Democratic frontrunner Hillary Clinton.

Researchers have discovered a scandalous link between Clinton’s campaign and an allegedly corrupt Russian bank — and it could raise serious questions as her presidential campaign rolls forward.

One of the banks named in the Panama Papers is Sberbank, which has been accused of being a personal bank of the Russian elite and even of helping to fund unrest in the Ukraine.

And Sberbank has been employing a lobbying firm linked to both a major Clinton fundraiser and her current campaign manager.

The lobbying firm in question — The Podesta Group — was co-founded by Clinton campaign manager John Podesta and is run by his brother Tony, who is a Clinton fundraiser and confidante.

Just weeks before the Panama Papers leaked, Sberbank had hired The Podesta Group to lobby on behalf of ending sanctions against Russian banks, which were put in place by America and her allies in response to the alleged Russian military intervention in Ukraine.

The fact that the Panama Papers have revealed that Clinton campaign associates have been retained to work on behalf of Russian banks — and against American interests — could spell long-term trouble for her campaign.

In particular, it is certain to revive concerns about massive amounts of foreign money that the Clinton Foundation and former President Bill Clinton received from foreign entities during Hillary Clinton’s time as secretary of state.

There have long been accusations that the Clintons were essentially offering influence to large foundation donors.

Voters and experts say the Panama Papers documents, which detail how business and political leaders hide vast sums of wealth, validate the frustration felt by supporters of Clinton rival Vermont Sen. Bernie Sanders, who feel hard work is no longer enough to get ahead in America, as well as the anger of GOP frontrunner Donald Trump voters who want the system dismantled.

“We’ve recently heard the startling revelations about the tax dodge that is taking place in Panama,” Sanders told supporters in Wyoming Tuesday night after his win in the Wisconsin Democratic primary.

Joe Brettell, a Republican strategist based in Houston, doubted whether the public’s fury could get much worse.

“[Trump’s] issue is not that these rich people are not playing by the rules. It’s that we need powerful people who will protect Americans,” Postel said. “That’s a different thing that provokes outrage.”