Clinton: The last 8 years have been a disaster - The Horn News 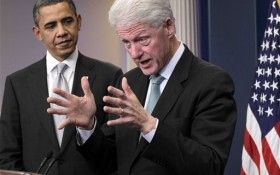 It seems like the more former President Bill Clinton talks, the more trouble he finds himself in.

At an event to support wife Hillary Clinton’s 2016 presidential campaign Monday, the former president was at it again when he seemed to claim President Barack Obama was leaving an “awful legacy,” and sent the Democratic establishment scrambling for damage control.

Clinton told the pro-Hillary crowd that, “if you believe we’ve finally come to the point where we can put the awful legacy of the last eight years behind us… then you should vote for her.” .

Critics of the Clinton’s were quick to jump on the comments and spread video of the shocking admission.

The former secretary of state’s 2016 presidential campaign quickly backtracked from the statement, and a spokesman claimed that the former president was speaking about the Republican-controlled Congress, and not Obama’s legacy.

“After President Obama was elected, Republicans made it their number one goal to block him at every turn,” Clinton spokesman Angel Urena told USA Today. “That unprecedented obstruction these last eight years is their legacy, and the American people should reject it by electing Hillary Clinton to build on President Obama’s success so we can all grow and succeed together.”

The former secretary of state is locked in a fierce contest for the 2016 Democratic presidential nomination with Vermont Sen. Bernie Sanders, who remains popular among his party’s most liberal voters. The Vermont senator, now trailing the former secretary of state by more than 300 pledged delegates, has targeted Tuesday’s races as the start of a comeback tour. The Clinton campaign has been eager to link itself to Obama’s presidency as a way of rallying her base against Sanders.