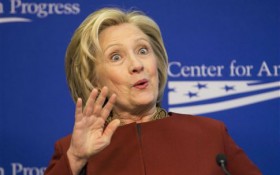 The trip to Georgia and South Carolina comes as Clinton works to solidify her advantage in the African-American community over Vermont Sen. Bernie Sanders. Both candidates have called for ending mass incarceration in the United States, an issue that resonates strongly among black voters who will play a key role in choosing a nominee.

In Atlanta on Friday, Clinton will call for eliminating sentencing disparities between crack cocaine crimes and those that involve powder cocaine. Clinton proposes making the change retroactive, according to her campaign. The changes would build on a 2010 act of Congress that narrowed the disparity between crack crimes — which are concentrated among minorities — and powder crimes, which are more likely to involve whites.

Clinton’s African-American outreach has been clouded at times by political scandal, said civil rights leader Jesse Jackson, who cited her use of private email while secretary of state and the death of an American ambassador in Libya.

“Hillary was always raising the right issues, but you couldn’t hear it for the noise around the servers and the Benghazi issue,” Jackson told media outlets before her Friday remarks.

Jackson’s comments are meaningful given his longstanding ties to Clinton and Sanders, her chief rival. Sanders endorsed both of Jackson’s presidential bids in 1984 and 1988.

Clinton on Friday also will propose a legal ban on racial profiling by police. The policy would forbid federal, state and local officers from “relying on a person’s race when conducting routine or spontaneous investigatory activities,” unless they have information linking a suspect to a crime. The campaign has not yet released details explaining how Clinton’s idea would go beyond existing law, but cited previous congressional proposals that would make it easier for alleged profiling victims to recover damages from government agencies in civil court.

Clinton has two campaign stops set in Atlanta, one to address a group of black ministers, another to greet supporters at Clark Atlanta University, a historically black campus near downtown. Later Friday, she is scheduled to address an NAACP banquet in Charleston, South Carolina. It is the organization’s first annual banquet since the April killing of Walter Scott, a black man shot by a white North Charleston police officer who was later fired and charged with murder, and the June massacre at Charleston’s Emanuel African Methodist Episcopal Church, where a white gunman killed a pastor and eight others.

Sanders and Clinton mention both events in their campaign pitches. But it was Clinton who attended the public funeral for the Rev. Clementa Pinckney, the state senator and Emanuel pastor. She received a warm welcome from thousands in attendance.

The Southern campaign swing is part of Clinton’s increasing emphasis on a band of conservative states that typically garner more attention from Republican White House hopefuls.

South Carolina holds the South’s first primary, weeks after overwhelmingly white Iowa and New Hampshire open the nominating contest. Georgia is among several states stretching from Virginia to Texas that will hold March primaries. The front-loaded Southern schedule is a byproduct of Republicans’ domination in the region. GOP leaders who run statehouses here wanted their constituents — nearly all of them white conservatives — to have greater influence in choosing the Republican nominee after being dissatisfied with failed standard-bearers John McCain and Mitt Romney.

Yet the move also elevated Southern Democrats, increasingly synonymous with black Democrats as white Southerners defected to the GOP. It’s a constituency Clinton has known and cultivated for decades — and one that Sanders has struggled to tap, despite his emphasis on racial equality, economic issues in the minority community and his own civil rights work.

Another Democratic contender, former Maryland Gov. Martin O’Malley, has also aggressively courted the black community. He rolled out a criminal justice reform plan earlier in the year that includes some of the same policies Clinton unveiled on Friday.

In states such as Alabama, South Carolina, Mississippi, Georgia and Louisiana, blacks could make up a majority or close to a majority of the Democratic primary electorate, potentially positioning Clinton to build an early — or even decisive — lead in delegates over Sanders and O’Malley.

Clinton already has built a network of African-American leaders in those early states.

In Georgia, she’ll be joined Friday by Rep. John Lewis, the civil rights icon and veteran Atlanta congressman. On Thursday, her campaign announced endorsements from a dozen chairmen, present and past, of the South Carolina Legislature’s Black Caucus.

In Alabama earlier this month, she used a speech in front of black Democrats to blast the state’s white Republican governor for closing driver’s licenses offices in 31 counties, many of them overwhelmingly black. Alabama requires photo identification to vote, and driver’s licenses are the most common form of government-issued photo IDs.

Rousing the crowd of 700 people, many of them elected officials and local party leaders, Clinton called Alabama’s action “a blast from the Jim Crow past.”