Clinton: I will resist sending forces to fight ISIS - The Horn News 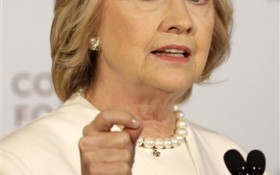 Is former Secretary of State Hillary Clinton scared of the Islamic State?

Clinton promised that, under her presidency, she would resist sending U.S. forces to fight Islamic militants no matter what… even if ISIS directly attacks American soil.

“I think [doing so] would be a mistake,” she said during a question-and-answer session with CNN’s Fareed Zakaria in New York, when she was asked if the pressure to send in U.S. ground troops to Syria would be “unstoppable” if they attacked in the U.S.

Instead, Clinton said she backs the president’s efforts to combat Islamic militants.

Her remarks drew a striking contrast with many of her Republican opponents who have advocated for a large-scale military mobilization, new measures to bar Syrian refugees from entering the country and a congressional declaration of war.

Former Florida governor Jeb Bush on Wednesday called for the US to “increase our presence on the ground,” in a speech in South Carolina. Bush offered no specifics, but said the number of Americans sent to the region should be “in line with what our military generals recommend, not politicians.”

In Congress, House Republicans are pushing legislation toward approval that would erect fresh hurdles for Syrian and Iraqi refugees trying to enter the country. President Barack Obama has promised to veto the bill.

Republicans have sought to link Clinton to the unpopular foreign policy of Obama, casting her as continuing his strategy in the region. His critics have said he underestimated the threat posed by Islamic State militants, noting he once referred to the group as the “JV squad.”

“From Libya to Russia to China, Hillary Rodham Clinton has been the chief architect of the Obama administration’s failed policy of coddling adversaries, disrespecting allies and leading from behind,” said Steven Law, head of American Crossroads, a Republican political group, in a statement.