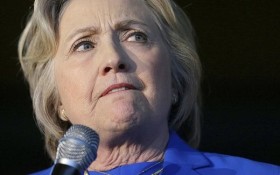 The State Department’s Office of the Inspector General (OIG) delivered a sharp rebuke to Hillary Clinton yesterday, in a report that heavily criticized her use of a private email server while secretary of state.

But the report included more than evidence of Clinton’s bad judgment.

It proved she has been lying about her emails for months.

Despite repeated denials from Clinton that her emails were compromised, the OIG report concluded that she likely knew her server was hacked — and went to lengths to keep from reporting it.

Already, Clinton faces questions about her trustworthiness, with months of polling showing voters give her low marks for integrity.

According to The Washington Times, “Inspector General Steve Linick, appointed by President Obama, said he couldn’t find any evidence that Mrs. Clinton received approval for her odd email arrangement, and when lower-level staffers pressed the issue, saying she was skirting open-records laws, they were ordered ‘never to speak of the secretary’s personal email system again.’”

What’s more, she may have broken the law by failing to report hacking attempts.

She and her staff suspected they’d been compromised numerous times — and failed to report it. In the past, Clinton has insisted that her home-brew email server was never hacked, but the OIG has determined that to be a untrue.

According to The Washington Times, “In one instance in 2011, Mrs. Clinton’s tech guru thought the server was being hacked and shut it down for a few minutes. Months later, Mrs. Clinton feared yet another hack attack was underway — yet never reported the incident to the department, in another breach of department rules.”

“Notification is required when a user suspects compromise of, among other things, a personally owned device containing personally identifiable information,” OIG released yesterday. “However, OIG found no evidence that the Secretary or her staff reported these incidents to computer security personnel or anyone else within the Department.”

There’s one way to describe that behavior – illegal.

“This report underscores what we already know about Hillary Clinton: she simply cannot be trusted,” said House Majority Leader Paul Ryan, in a statement.

What worries Democrats more is what may be coming. The FBI investigation into whether Clinton’s use of a private server caused her to mishandle classified information is still ongoing. Officials recently interviewed Clinton’s top aides, including former chief of staff Cheryl Mills and deputy chief of staff Huma Abedin.

A federal indictment would be potentially fatal to her campaign.