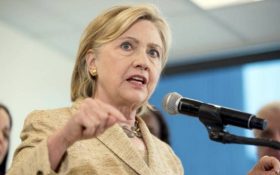 Unfortunately for her, the FBI agents that interrogated her just sent their closed-door meeting notes over to conservative lawmakers — and it could be very bad news for Clinton.

Because the FBI notes include detailed discussions on the 22 top-secret emails Clinton sent through her improperly secured homebrew email server, the notes are considered highly classified information — meaning the public can’t see them.

But unfortunately for Clinton, members of Congress can. And leading conservatives have been chomping at the bit for a chance to review them.

“Congressional investigators — led by House Committee on Oversight and Government Reform Chairman GOP Rep. Jason Chaffetz of Utah — have been aggressively seeking the entire file, including a summary of Clinton’s interview, known as a ‘302.’,” Fox News reported.

Republicans claim the FBI notes, which are typically kept confidential, may show Clinton provided inconsistent answers to questions about her handling of emails containing classified information during testimony last year before the House Benghazi panel.

A spokeswoman for the Republican-led House oversight panel said staff is reviewing documents that are classified as secret. Rep. Adam Schiff, the top Democrat on the intelligence committee, said in a statement that the panel received “FBI witness interview reports, including that of Secretary Clinton’s interview, along with other materials from the FBI’s now closed investigative file.”

The FBI last month closed its yearlong probe into whether Clinton and her aides mishandled sensitive information that flowed through a private email server located in the basement of her New York home. Though he described Clinton’s actions as “extremely careless,” FBI Director James Comey said his agents found no evidence of criminal wrongdoing by the Democratic presidential nominee.

In a statement, the FBI said the materials were provided to Congress consistent with the agency’s “commitment to transparency” in the Clinton case. The material contains classified information and was provided “with the expectation it will not be disseminated or disclosed” without the FBI’s agreement, the agency said Tuesday.

Furious the FBI didn’t press charges against their political rival, House Republicans pressed the agency to release notes from its agents’ July interview with Clinton. They claim the FBI notes, which are typically kept confidential after an investigation is closed, may show Clinton provided inconsistent answers to questions about her handling of emails containing classified information during testimony last year before the House Benghazi panel.