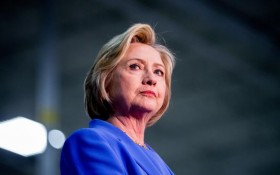 At a time when former Secretary of State Hillary Clinton should be focusing on beating billionaire Donald Trump, she may spend the next few months just trying to beat the rap.

New evidence shows that her alleged mishandling of classified documents was so careless, she practically handed them directly to foreign spies.

And that negligence could lead to charges that carry a 10-year prison term.

Reports have surfaced that the Russian intelligence agency has tens of thousands of Clinton messages from her controversial homebrew email server. It’s reportedly deliberating whether to release them publicly, or file them away for the time they will do maximum damage.

Letting classified documents fall into a foreign government’s hands, especially though negligence, is a clear-cut violation of federal criminal law.

Marcel Lazar, a Romanian hacker who goes by the monicker “Guccifer,” told Fox News this month that he had broken into Hillary’s private server. “It was easy,” he said – so easy that at least 10 others had reportedly compromised the server as well.

One of those other hackers may have been with Russian intelligence. Last week, Judge Andrew Napolitano said, “There’s a debate going on in the Kremlin between the Foreign Ministry and the Intelligence Services about whether they should release the 20,000 of Mrs. Clinton’s emails that they have hacked into.”

According to one report, Lazar had tried to hack “Russia Today” and used a server based in Russia for his work, leading Russian agents to spy on him. When he learned Clinton’s information, the Russians learned it, too.

Lazar apparently managed to hack the account of a close Clinton family friend, Sid Blumenthal, a politico so slimy his nickname is “Sid Vicious.”

Now, Lazar says, he used clues from Blumenthal’s emails to compromise the secretary of state’s home server, which contained 22 “top secret” messages, by secretly plugging into an open port.

Lazar was the first person to reveal the existence of Clinton’s private, unsecured email server in 2013.

But did the Russian government really breach Hillary’s private server and gain state secrets? No one knows for certain except top Russian spies. But again, experts have said consistently there’s every reason to believe Moscow has all of Clinton’s email records.

That could damage America’s future regardless of who gets elected this fall. At Forbes magazine, Paul Roderick Gregory writes, “If Putin rules out blackmail, the Kremlin could selectively leak damaging information to U.S. allies and enemies that would weaken the United States’ hand in world affairs” for years to come.

Clinton’s failure to safeguard classified information appears to be a clear and serious violation of the Espionage Act. The relevant part of the law, 18 USC 793, says that anyone who handles important national security documents with “gross negligence,” so that they are “delivered to anyone,” or “lost,” or “stolen,” is guilty of a felony.

The guilty party “shall be fined under this title or imprisoned not more than 10 years, or both.”

In the eyes of the law, it doesn’t matter whether Clinton had shady motives in using a private e-mail address and server when conducting national security discussions.

It only mattered that she didn’t secure thousands of national secrets in her possession.

Experts such as Judge Napolitano and former Attorney General Michael Mukasey agree that Clinton’s actions broke the law, and she should serve real jail time for the careless way she handled state secrets.

In each Clinton scandal – from Whitewater, to perjury, to taking bribes through the Clinton Foundation – the Clinton’s have managed to skate on a technicality, like what “”the definition of ‘is’ is.”

This time, there may be no place left to hide, and Clinton may finally have to face the music.