Clinton e-mail scandal grows; could someone be heading to prison? - The Horn News 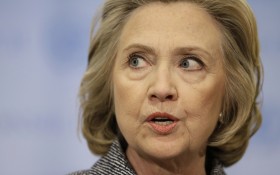 Hillary Clinton’s e-mail problems are getting worse. The controversial e-mail server recently turned over to the FBI had been wiped clean. And according to Fox News, there is speculation by officials in the State Department that some of Clinton’s inner circle may have stripped e-mails of their classified designation.

If that’s true, it’s highly illegal. If someone ordered it done, they also could face serious jail time.

Try as she might to focus on the policies she wants to enact if elected president, Clinton just can’t dig out of her inbox.

She agreed to turn over her private server to the Justice Department this week on the same day Congress got word that at least two emails that traversed the device while she was secretary of state contained information that warranted one of the government’s highest levels of classification.

Clinton’s attorney said the server had been wiped clean and no emails remained on the device.

The developments suggest the investigation into the security of Clinton’s email setup could run deep into 2016, as she is trying to win the Democratic nomination for president and, potentially, the general election.

The issue has become a major part of the GOP case against Clinton.

“I think it’s about time that she dealt with the consequences of this,” said GOP candidate and Wisconsin Gov. Scott Walker. “This is something that isn’t just a matter of her not being able to tell the truth; this is something that has put national security at risk and highly questions her ability to be the commander in chief of the United States.”

Each day will give Republicans another opportunity to remind voters of the issue, as Rep. Darrell Issa did Wednesday, saying Clinton should be investigated criminally.

“If any other American had shown the same disregard for securing classified information that Hillary Clinton showed, the United States government would move quickly and decisively to hold them responsible,” he said in a statement.