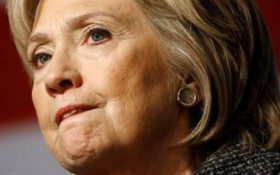 The investigation into former Secretary of State Hillary Clinton’s controversial homebrew email system — and whether the setup illegally compromised national secrets — is in full tilt at the FBI.

And, ultimately, it will be up to Department of Justice to decide whether to indict Clinton .

But it turns out that some of the same DoJ employees who may decide Clinton’s fate have also been quietly funding her campaign for months.

A disturbing review of government financial documents shows a staggering amount of financial connections between the Clinton campaign and hundreds of DoJ employees, calling into serious question how impartial they could possibly be.

According to a review of political donors, Clinton has collected nearly $75,000 total from 228 different DoJ workers, including 12 contributors who gave her campaign the maximum individual amount allowed by law, $2,700.

Critics say the connections show a clear bias in the Justice Department, and provide further evidence that an independent counsel should be appointed to oversee possible charges against Clinton.

“Today, I renew my call that Attorney General Lynch must appoint a special counsel to determine if Hillary Clinton or her agents broke the law and compromised our national security,” Citizens United President David Bossie told the Washington Free Beacon, who first reported this story. “This investigation needs to be conducted free of political influence once and for all.”

This isn’t the first time the Obama administration has been accused of bias in the Clinton investigation. In February, The Hill wrote that, “Critics of the Obama administration say Attorney General Loretta Lynch should be disqualified from overseeing the investigation into Hillary Clinton’s email server because of the more than $10,000 she has given to Democrats in recent years.”

Ironically, even Lynch herself has pointed out bias in the U.S. justice system. “I think it is fair to say, [the criminal justice system] is in a state of crisis,” said Lynch in a keynote address to the 19th Annual Public Policy Forum at Columbia University in April.

There is an old saying — if it smells like dog poop everywhere you walk, it may be time to look at your own shoes.