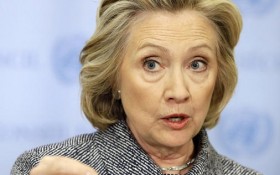 As the battle for the Democratic party’s presidential nomination heads to delegate-rich New York, supporters of Vermont Sen. Bernie Sanders are making a shocking allegation.

A scam that kept thousands of Sanders backers from casting their ballots in Arizona last month is being run again in New York.

And they’re concerned that Hillary Clinton and the powerful party forces backing her may be behind it.

As one social media user from New York put it, “voter suppression is alive and well here.”

For last month’s Arizona primary, thousands of Sanders backers who had previously been registered as independents switched their party registrations to Democrat so they could vote.

But when they showed up at their designated polling places, they learned that their registrations had suspiciously been switched back to independent — and they were unable to cast their ballots.

And now it appears something awfully similar is happening in New York.

New York is a closed primary — which means that only registered Democrats can vote. And Sanders supporters who registered as Democrats say their party affiliations are being changed against their will.

According to a report from The Gothamist, “Since shortly before the late deadline to register to vote in the April 19th presidential primary in New York, state Board of Elections spokesman Tom Connolly said his office has been fielding nearly 100 calls a day from voters who are ‘pissed off’ about their registration status,” and that “the complaints are largely coming from Democrats—’a lot’ of them Sanders supporters.”

Sanders supporters have taken to social media to air their grievances, many concerned that they won’t be allowed to vote, even though they had properly registered as Democrats:

NYers – If you’re experiencing issues with voter registration changes, this is a solution! Please share#FeelTheBern pic.twitter.com/mX2VZ4GG13

Sanders, whose recent victory in Wyoming means he has now won seven of the last eight state contests, has been gaining on Clinton in polls and delegates recently.

“Now that we are in the second half of this campaign, we are going to state after state which I think have a more progressive outlook,” Sanders said. “We are in this race to win.”

Clinton has 1,287 delegates based on primaries and caucuses to Sanders’ 1,037, meaning the 291 delegates at stake in New York are crucial for both campaigns.

These rumored voter suppression tactics have “alarmed many would-be voters, most of them seemingly Bernie Sanders supporters. Sanders fans are already on tenterhooks over long lines at the polls in Arizona, which the Justice Department is now investigating, and polling place electioneering by former president Bill Clinton in Illinois and Massachusetts, which local election officials declared proper, among other factors that they argue have skewed the primary process for Hillary Clinton,” according to The Gothamist.

In July of last year, an expert writing for the Huffington Post warned of this possibility, saying that outside parties could potentially “delete or change election records,” to disrupt voting.