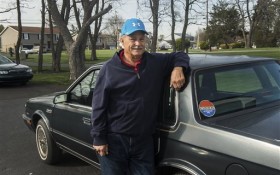 A retired White House gardener is selling Hillary Clinton’s 1986 Oldsmobile Cutlass, which he bought at an auction for the residence’s workers and has been sitting in his Pennsylvania garage for years.

Mike Lawn, who worked at the White House for nearly three decades, bought the car in 2000 to give to his daughter when she turned 16, but she wouldn’t drive it.

“She said it looked like an old lady’s car,” Lawn told The Evening Sun newspaper. “She didn’t know why it had cranks in the windows.”

The four-door sedan, complete with 1990 “Clinton for Governor” sticker on the back windshield and Arkansas license plates, has been hardly used over the last 16 years, with just over 32,000 miles on it.

The car was parked on the south grounds of the White House for eight years, he said, and was only moved occasionally to make sure the battery was running. However, he said he did see Chelsea Clinton drive the car when preparing to get her driver’s license.

He said he found a few items in the car, including a pair of Clinton’s sunglasses in the glove compartment.

Lawn, who lives in Gettysburg, said with Clinton now the Democratic front-runner in the presidential race, the time is right to sell.