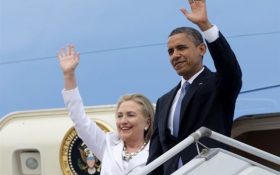 For her entire adult life, Clinton has made sure that other people paid for her mistakes, covered up her crimes, and always managed to get away scot-free. This week, her friends in President Barack Obama’s administration seem to have made another Clinton problem disappear.

Obama quietly shut down a criminal case that some critics say would have shown that Clinton’s actions as secretary of state resulted in arming the Islamic terrorists who attacked Benghazi.

And they’ve sealed the records forever.

For years, investigative reporters have said that Clinton approved arms shipments to Libyan “rebels” linked to Al-Qaeda and ISIS, and that U.S. arms fell into the hands of the people who killed U.S. citizens in cold blood on the 10th anniversary of 9/11.

Turi makes no bones about the fact that he sold and shipped weapons to Islamic radicals in 2011. But he says the Obama administration – including Hillary Clinton – signed off on the deal, because they wanted to help radical Islamic “rebels” overthrowing pro-U.S. regimes during the Arab Spring.

Sponsored: Did you know you can actually starve cancer cells to death?

Tragically, Ambassador Chris Stevens personally helped Turi apply for permission to sell weapons to Libya in 2011. Instead of shipping weapons directly to Libya, Turi came up with a “footprint-free” way to ship weapons to Qatar and the UAE, who would give them to the Islamic Libyan “rebels” so dear to Obama and Hillary’s hearts.

The weapons were being filtered through…. you guessed it… Benghazi.

Clinton liked the idea that she could deny she was arming the rebels directly.

In an e-mail sent from her controversial homebrew e-mail server in April 2011, she wrote, “The idea of using private security experts to arm the opposition should be considered.”

So, the State Department approved the scheme. Then all hell broke loose.

“When this equipment landed in Libya, half went one way, and the half went the other way,” Turi said. Half went to Islamist assault groups associated with Al-Qaeda in Libya, the other half to ISIS-tied fighters in Syria.

Think about that scenario: The Secretary of State helped hand Ambassador Chris Stevens’ murderers the murder weapon, and now she wants to be elected president. And she won’t let anything, or anyone, stand in her way.

She even told Congress her department absolutely did not arm the rebels — a statement that may very well be perjury.

Instead of owning up to the scandal, Obama accused Turi of selling the weapons illegally and left him holding the bag – and facing jail time and disgrace.

But then something amazing happened: A judge threatened to tell the truth about Obama, Clinton, and their cronies.

Originally, the judge overseeing the case ordered the State Department to produce documents showing how they directly armed the Libyan rebels. Obama played fast-and-loose, saying that he didn’t directly arm them, since the weapons went through other countries.

Last month, a judge ruled that the Obama administration had to turn over all records about how it planned to arm the rebels, including their terrorist allies who ended up killing Chris Stevens.

On Monday – two days before he had to turn over the documents – Obama’s administration quietly dropped the case and let Turi live in peace.

As part of his agreement to stay out of jail, Turi had to sign an agreement that the details of the shipments remain classified. Obama’s not taking any chance that the American people will find out that their tax dollars may have paid for the murder of their own citizens — and that Clinton signed off on all of it.

To incredible to believe? Not according to high-ranking intelligence officials.

David Manners, an 18-year CIA veteran, testified last May that “the United States did participate, directly or indirectly, in the supply of weapons” to Libyan rebels.

The Washington Times found documents showing that the administration approved one of Turi’s suppliers – Dolarian Capital Inc. – to sell “rocket launchers, grenade launchers, 7,000 machine guns and 8 million rounds of ammunition” to Kuwait, which would give them to Libyan rebels. The Obama administration canceled that – but did it replace it with Turi’s plan to use Qatar and the UAE instead?

The New York Times even admitted in 2012 that Obama authorized shipments and then lost track of the weapons, which ended up in the hands of terrorists.

The head of Libya’s opposition, then-Prime Minister Mahmoud Jabril, complained to President Obama in 2011 that U.S. weapons were being used against him and his forces.

Is it possible these weapons ended up pointed at Americans in Libya – and Christians in Syria or other locations all over the Middle East?

Thanks to this settlement, we’ll never find out all the facts. But it’s clear a massive cover-up is occurring. And Turi’s friends are telling the media that, if the details were known, they would be a disaster for Clinton’s campaign.

“They don’t want this stuff to come out because it will look really bad for Obama and Clinton just before the election,” a source close to the situation told Politico.

If she is elected president, Americans will be paying the price for her mistakes for years and years to come.