Clinton accused of cheating in Kentucky - The Horn News 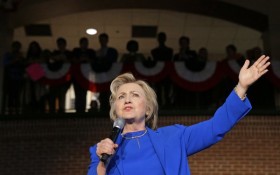 Opponents of former Secretary of State Hillary Clinton have accused her of dirty political tactics for decades.

In Kentucky yesterday, yet another of her 2016 Democratic primary wins has become embroiled in controversy. More than 76 reports of election fraud from 31 counties were called into the Attorney General’s hotline during the neck-and-neck primary, according Attorney General Andy Beshear.

According to many outraged supporters of Vermont Sen. Bernie Sanders, this is frustratingly familiar to what has occurred in other states – and many are pointing the finger at the Clinton campaign.

This wouldn’t be the first time the Clinton campaign has been accused of election ‘shenanigans’ in the 2016 Democratic primary.

“Beginning in Iowa and climaxing with the holy mess that occurred in Arizona, the Democratic presidential primaries have been a Wagnerian Ring Cycle of electoral ‘shenanigans,’ cynical rule-bending and outright voter suppression,” The Huffington Post reported back in March. “The DNC has relied upon its favorite scapegoats (benign incompetence, and of course, Republicans) to explain away the convenient ‘mishaps’ and anomalies that have consistently favored Clinton as she elbows her way to the Democratic coronation ceremony in Philadelphia.”

Clinton had been barnstorming around the area in recent days, dispatching campaign workers all over the Bluegrass state. It was seen as a must-win after a string of primary losses to Sanders.

“There were 25 calls from Jefferson County, including questions about a voting machine and complaints about vote buying and electioneering within 100 feet of a polling place. Kentucky law prohibits handing out candidate literature, displaying signs or other campaign-related activities near polls on an election day,” local station WDRB reported Tuesday.

The Clinton campaign will likely insist that these dozens of complaints can be explained away. But when added to months and months of primary election fraud accusations, at some point an investigation should be launched.

Sanders himself has complained recently about dirty tactics throughout the primary. In a letter defending his supporters at the Nevada Democratic Primary, Sanders revealed that “shots were fired into my campaign office in Nevada” and that an “apartment housing complex my campaign staff lived in was broken into and ransacked.”

While the Democratic presidential hopeful did not explicitly blame his rival, supporters of Sanders on social media were quick to connect the Clinton campaign.