Clean or unsportsmanlike? The leg-breaking baseball slide everyone is talking about - The Horn News 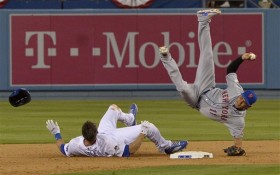 Whether you think it was a clean play, or a cheapshot, this much is certain: Anyone who bemoans that baseball’s gone soft never covered second base with Chase Utley bearing down on a potential double play.

Utley’s agent called the penalty “outrageous and completely unacceptable” and said there would be an appeal. 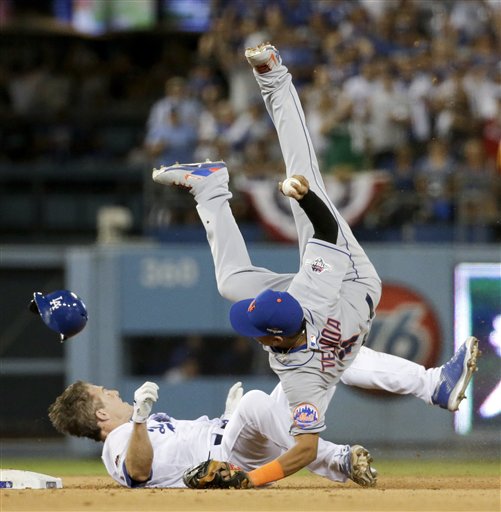 Of course, that’s not how the seething Mets viewed it after Tejada was carted off in an air cast.

“Before he could get the ball out of the glove, he’s getting tackled,” infielder Kelly Johnson said.

“Slide would be generous,” snarled an irritated Daniel Murphy.

Umpires on the field ruled it a legal play. But after reviewing it “from all conceivable angles,” Major League Baseball executive Joe Torre called it an illegal slide and suspended Utley for two playoff games Sunday night.

The infielder planned to appeal, according to his agent. The Mets released a statement saying they “completely support the decision” and “feel this was the appropriate course of action.”

No matter where your allegiance might lie, it was a flash-point play that immediately dropped jaws and grabbed attention for several reasons.

First, runners rarely go in that hard at second base these days, although Utley long ago earned a notable reputation for it.

Second, it led to a serious injury.

And third, it was the turning point in a playoff game that millions were watching.

So there’s no doubt, Utley flipping Tejada at Dodger Stadium will become this generation’s reference point for famous takeout slides — a flashback to a bygone era when middle infielders were wiped out with such force more frequently.

Think of Pete Rose barreling into Bud Harrelson, sparking a brawl between the Reds and Mets in the 1973 NL Championship Series. Or Hal McRae upending Willie Randolph during the 1977 Royals-Yankees ALCS.

And this one had all the qualities of a sports injury that won’t soon be forgotten — like Rose running over Ray Fosse at home plate, or Lawrence Taylor snapping Joe Theismann’s leg on “Monday Night Football.”

Thus, the debate raged on, with current and former players from all around the majors weighing in on social media and television.

“I hate the fact that people keep saying he plays the game hard. Everybody on the field plays the game hard,” said ESPN analyst Alex Cora, a middle infielder during his playing days. “There’s a way you should play the game, and this is not the way.

By now, most everyone with any interest has seen a replay of the violent collision that swung Game 2 of the NL Division Series in Los Angeles’ favor.

With the Dodgers trailing by a run in the seventh inning, Utley slammed into Tejada at second base to make sure the Mets could not complete a double play that would have kept them ahead. Utley went in high and hard, crashing into Tejada’s legs and flipping the shortstop head over heels.

The tying run scored, Tejada was wheeled off with a fractured fibula and the Dodgers rallied for three more runs in the inning, going on to a 5-2 victory that evened the best-of-five series at one apiece.

“I feel terrible that he was injured. I had no intent to hurt him whatsoever,” said Utley, an All-Star second baseman who knows firsthand the perils of turning two. “You have to try and break up the double play. That’s winning baseball.” 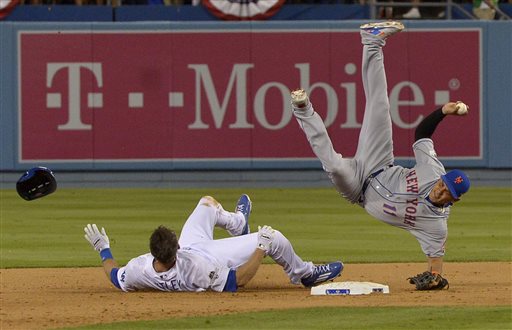 But did it cross the line?

Takeout slides are an accepted part of the game — always have been. The general guideline is they’re within the rules as long as a runner doesn’t go so far out of the basepath he can’t reach second base.

But there’s also an etiquette to it because the later the slide, the more dangerous it can be.

“I just try to stay low,” Chicago Cubs slugger Anthony Rizzo said. “There’s ways to do it, there’s ways not to do it.”

Utley went down late, twisting himself beyond the bag to clip Tejada rather than attempting to touch second base. Tejada was in a vulnerable position, with his back to the oncoming runner, after reaching behind his own body to glove an off-target toss from Murphy and trying to make a spinning pivot.

“I bet if he didn’t get hurt nobody would be talking about it,” Houston Astros rookie shortstop Carlos Correa said.

A comment in the Official Baseball Rules indicates umpires could have called an inning-ending double play if they determined Utley intentionally interfered with Tejada.

“While I sincerely believe that Mr. Utley had no intention of injuring Ruben Tejada, and was attempting to help his club in a critical situation, I believe his slide was in violation of Official Baseball Rule 5.09(a)(13), which is designed to protect fielders from precisely this type of rolling block that occurs away from the base,” Torre said.

Torre also mentioned it’s difficult for umpires to walk the fine line between what’s considered out of bounds and what is a clean, hard-nosed play.

“I don’t think anyone knows exactly what that line is,” Mets outfielder Curtis Granderson said.

New York is not the only playoff team to lose its starting shortstop on a similar play recently. Pittsburgh Pirates rookie Jung Ho Kang broke his leg and tore a knee ligament last month on a takeout slide at second base by Chris Coghlan of the Chicago Cubs.

Kang is expected to be sidelined six to eight months. But most players — including Kang — said they thought it was a legal slide by Coghlan.

With an eye toward safety, MLB recently adopted new rules to protect catchers from home-plate collisions. St. Louis Cardinals manager Mike Matheny said he thinks contact at second base will probably be addressed this winter.

“We’re trying to keep our players on the field and put a better product out there,” he said.

Johnson and Correa were among those calling for change — or at least clarification.

“They protect the catcher. I think they should protect us middle infielders as well,” Correa said.

Cardinals third baseman Matt Carpenter, however, didn’t like the sound of that.

“We’re getting to the point now where it’s like, are we going to wear shoulder pads when we play? I don’t know. You never know how much is too much, changing the way the game is meant to be played,” he said.

And even Granderson had reservations.

“Obviously when a player gets injured, everybody wants to change everything,” he said. “Even though we’re not necessarily a contact sport, there’s times where contact is going to happen, and unfortunately for us, we end up losing a player because of it. But it doesn’t necessarily mean that you need to go out there and start changing rules.”

Utley, meanwhile, was asked what constitutes a dirty slide.

“I think cleats high, hitting the guy before you hit the ground,” he answered.

After seeing the replay, did he think this one was dirty?