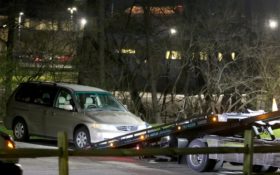 The father of a 16-year-old boy who died after being trapped in a minivan has questioned why responding officers didn’t get out of their cruiser.

Plush promised to help improve the city 911 system but also said he would be asking difficult questions.

Mayor John Cranley told Plush he would receive written responses to every question and called the police report on the case incomplete.

Cranley says the city failed in its response to two 911 calls from a 16-year-old boy who died after being trapped in a minivan.

The mayor apologized at a meeting Monday about the police response by saying the city should and must do better in the future.

Police Chief Eliot Isaac was presenting the results of an internal investigation before the City Council’s law and safety committee.

An earlier scheduled presentation was blocked when Hamilton County Prosecutor Joe Deters (DEE-’turs) subpoenaed police records for his own review of the Kyle Plush case.

The teen’s father found his body April 10 inside the 2004 Honda Odyssey in a parking lot near his school nearly six hours after Kyle’s first 911 call. A coroner says he died of asphyxiation from his chest being compressed.