Church kicks out 103-year-old woman! See why… - The Horn News 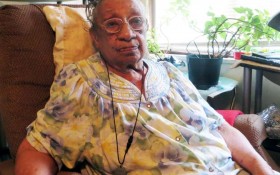 A small church in northeast Georgia is defending its decision to revoke the membership of a 103-year-old woman who disagreed with the pastor.

The woman has been a church member for 92 years but disagreed with its pastor, Timothy Mattox, about worship practices that include laying hands on members.

Biggs, a retired teacher, said such activities aren’t Baptist but were introduced at the church by Mattox, one of her former students.

“He is a holy sanctified minister or so he says. We voted him in and we didn’t know it until he was there. We are Baptists and that’s what we want to stay,” Biggs said.

“It was determined by the congregation during a church conference meeting, which Mrs. Biggs was present at the time of the meeting, that the behavior of Mrs. Biggs and others was detrimental to the church at large and could no longer be allowed,” according to the statement.

Church members voted in August to revoke Biggs’ membership, although she has continued attending services.

Biggs was previously a church officer, and her father was one of its founders. She received a letter about her expulsion.

“I was unhappy and shocked,” said Biggs. “I joined the church when I was 11 years old.”

Also banned from the church was Biggs’ grandson, Eliott Dye, a member for 30 years, and Kevin Hamm, an ordained minister who was also a member of the church.

“I tried to talk with (Mattox) and he was just determined to say, ‘You can’t come over here, period,'” Hamm said.