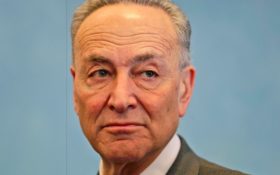 Senate Minority Leader Chuck Schumer, D-N.Y., is one of the most visible figures in the Democratic Party.

A longtime establishment insider, Schumer is also a leader of the so-called “resistance” against President Donald Trump.

Which is what made his tweet Sunday, when he cheered on Trump’s latest moves, so shocking.

Trump threatened to escalate a trade war between the U.S. and China over the weekend, stunning the stock market. Schumer quickly rose in support of the president, sending a message of encouragement to the White House in their new, “get tough” approach to the Asian giant.

Hang tough on China, President @realDonaldTrump. Don’t back down.

Strength is the only way to win with China. https://t.co/pZqeR346ov

Investors have been expecting the U.S. and China to resolve their damaging trade dispute, with the two sides set to meet this week in Washington.

Trump on Sunday threatened to raise tariffs on imports from China to 10% from 25% after complaining that trade talks were moving too slowly.

He also threatened to impose tariffs on another $325 billion in imports from China, covering everything the country ships annually to the United States.

Is this sarcasm? Please say yes.

Meanwhile, conservatives praised Schumer for looking beyond petty political stunts and working with the White House for the American people.

Indeed, it’s not often The Horn News says that Schumer is right — but this time, he nailed it.

So credit where credit is due.

Awesome, yes, it's great to everyone is coming together on obvious issues. China is the biggest threat to America and the rest of the world is facing.

I don’t even agree with this level of protectionism , but I’m overwhelmed to see you two agreeing publicly on anything. More please.