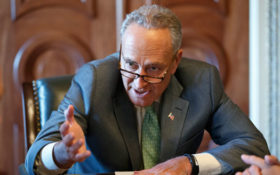 Senate Minority Leader Chuck Schumer got news over the weekend that has him panicked — and it’s going to cost Democrats millions of dollars.

New Jersey Sen. Bob Menendez is on the receiving end of a nearly $7 million cash infusion from the Democrat Senate’s super PAC after polls show he’s in trouble. Schumer is pulling out all the stops to try and save the seat for Democrats — but it may not be enough.

Republican challenger Bob Hugin has push Menendez to the edge, and polling indicates the senate seat is now a toss-up contest.

“Schumer has about $7 million against us in New Jersey, plus other outside forces have come against us,” Hugin told Fox News on Saturday morning. “It’s really a desperate last-minute gasp to save a failing politician who for 25 years has failed the state of New Jersey both morally and financially, failing to deliver for the people.”

Schumer and House Minority Leader Nancy Pelosi promised a “blue wave” in the 2018 midterm election — but it is increasingly unlikely that Democrats will gain control of the Senate.

And in deep blue New Jersey, Democrats are sensing trouble.

“The biggest threat to Menendez’s re-election is not so much Hugin than it is the voter who goes to the polls and decides to send Menendez a message, much the way many did in the primary when 38 percent voted for his unknown primary opponent,” The Cook Political Report wrote.

“There is certainly a thumb on the scale for Menendez, who is said to have a lead of between four and six points, in this very blue state, but the race is close enough to warrant a move to Toss Up.”

Who has your support?