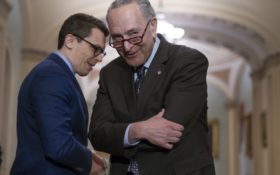 Instead, his bill would let states decide how to treat marijuana possession. Under the measure, the federal government would still enforce laws against moving pot into states where it’s illegal and would still regulate advertising so it isn’t aimed at children.

Eight states and the District of Columbia now allow recreational use of marijuana, and a majority allow its use for medical purposes.

The White House said last week that President Donald Trump backs legislation to protect the marijuana industry in states where it is legal.