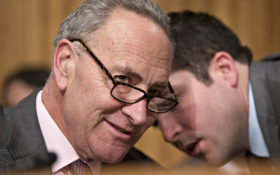 Chuck Schumer was riding high. He was ready to push through a far-Left agenda now that he’s the most powerful man in the Senate, even though his party doesn’t have a majority.

But first, he needs to change one thing about the Senate—and he just saw his hopes go up in smoke.

Chuck Schumer and Mitch McConnell both have 50 seats in the Senate. A rule called the filibuster lets one party stop a bill from coming up for a final vote until 60 senators support it.

If there were no filibuster, then any bill that got all 50 Democratic votes would become law after Vice President Kamala Harris broke the 50-50 tie.

That could clear the way for anything Schumer wants to do: Higher taxes, more Obamacare regulations, open borders, abortion until birth—as he said, “Everything is on the table.”

The first thing on the chopping block has to be a 215-year-old rule.

Schumer has a problem, though. His plan is so radical that even some of his fellow Democrats don’t want anything to do with it. And they just handed Schumer his first bone-rattling defeat.

“I will not vote to bust the filibuster under any condition, on anything that you can think of,” said Sen. Joe Manchin, D-W.V.

When asked a reporter asked Manchin a follow-up about what conditions would make him abolish the filibuster, Manchin said, “None whatsoever.”

He’s not the only one speaking out. Sen. Krysten Sinema’s office told The Washington Post that the Arizona senator is so opposed to the rules change that “she is not open to changing her mind about eliminating the filibuster.”

In addition to those two Democrats from red-leaning states, a few dyed-in-the-wool liberals have told Schumer to slow his attempt to roll over the Republican minority.

Sen. Dianne Feinstein of the one-party state of California “expressed her wariness of ending the tradition,” according to the New York Times.

And Democratic Sen. Chris Murphy of Connecticut is “none too eager to start down this road,” Time magazine reported, because he’s afraid the 2022 midterm elections “may give Republicans a majority again.”

Since Republicans lost the two run-off elections in Georgia, they are powerless to stop Democrats from shoving their liberal policies down Americans’ throats for at least two more years.

The filibuster is so important to blocking ultra-liberal legislation that a conservative, pro-life group is spending $200,000 on radio ads thanking Manchin, a Democrat, for keeping it alive.

Manchin and Sinema left so much egg on Schumer’s face that Republican Senate leader Mitch McConnell took a victory lap.

“Two Democratic senators publicly confirmed they will not vote to end the legislative filibuster,” said McConnell, who refused to vote on a plan to share power with Schumer until the filibuster was preserved. “They agree with President Biden’s and my view that no Senate majority should destroy the right of future minorities of both parties to help shape legislation.”

But don’t get too comfortable. The news media say McConnell is getting rolled.

Hillary Clinton’s former press secretary Brian Fallon said that “he was optimistic that before too long, Mr. Biden and his administration would recognize the need to get rid of the filibuster,” the New York Times reported.

The Democratic Party’s extreme Left grassroots know that this is their time. “We have a once-in-a-generation opportunity,” said Waleed Shahid, a spokesman for Justice Democrats, a far-Left PAC that endorsed Alexandria Ocasio-Cortez. “If they don’t reform the filibuster, they could squander this moment.”

And everybody knows the first rule of Democrats is never let a major crisis go to waste.

Even former Senate Majority Leader Harry Reid is calling on Democrats to abolish the filibuster, something he never did while in office. “The Senate will be just fine. Congress will be just fine,” Reid said.

Kamala Harris said she would abolish the filibuster on the campaign trail.

But what about President Joe Biden? Would he nuke Senate rules to shut down Senate Republicans? “It’s going to depend on how obstreperous they become,” Biden said during the 2020 election.

Obstreperous is a fancy word for unruly—which means Biden is ready to break the rules to get his way.

If so, he’ll have to twist some arms, because right now his fellow Democrats just handed Chuck Schumer his first major defeat.