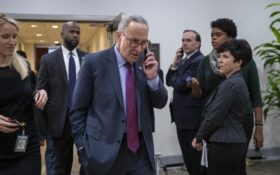 “He and I have an open relationship, we speak to each other regularly.”

This is what Rep. Alexandria Ocasio-Cortez, D-N.Y., once had to say about her fellow congressional colleague, Senate Majority Leader Chuck Schumer, D-N.Y.

They both get each other.

But it’s what Ocasio-Cortez wouldn’t say that has grabbed headlines.

In a June CNN interview set to air Monday night, she talked around the issue, softly hinting that she isn’t married to the demands of the establishment Democratic Party.

“I know there’s a lot of people who do not believe that, but I really, I can’t operate the way that I operate and do the things that I do in politics while trying to be, aspiring to other things or calculating to other things.”

You can watch a snippet of the interview below:

She went from waitress/bartender to Congress. Hear what it is like to be Alexandria Ocasio-Cortez aka AOC on Being, the new series hosted by Dana Bash. Premieres tonight at 9 p.m. ET on CNN pic.twitter.com/YkQPYdZsHT

Schumer is up for re-election come 2022 — a year expected to already be tough for Democrats after President Joe Biden’s tenure in office has gotten off to a less than graceful start.

An Ocasio-Cortez primary challenge could create a disaster within the party in a pivotal year that is seeing the GOP rabid to recapture Congress. But whether or not she ultimately cares remains to be seen.

In a January interview with Punchbowl News, that she wouldn’t base her decision on whether or not the House was in danger of being lost for the Democratic Party.

“I’m not sure about that either,” she said. “For me, I don’t make these decisions based on these short-term factors.”