What to do with your Christmas tree after the holidays (great ideas!) - The Horn News 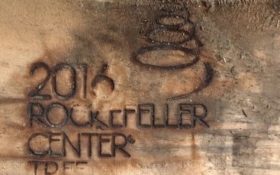 For the past decade, the ornament-laden trees that have been lit up with glitz, songs and dancing Rockettes have gone on to be milled into lumber used in dozens of Habitat for Humanity homes from Philadelphia to Pascagoula, Mississippi. Each tree yields a truckload of 100 or more boards, all stamped with an image of the tree and the year it was on display.

Wood from three of the Rockefeller trees has gone 50 miles (80 kilometers) up the Hudson River to the hardscrabble city of Newburgh, New York, which has helped create an unlikely Rockefeller Row of four homes on the same block.

“They didn’t just cut it and throw it away. They used it in something good. And what better than my home?” says Viridiana Perez, who was visiting her family’s soon-to-be home being built with wood from last year’s 94-foot (28-meter) Norway spruce.

Homeowner Keith Smith can’t see the unique wood from the 2015 tree in his home, but he feels it. He appreciates his family’s connection to the annual tree lighting extravaganza in Manhattan.

In addition to Newburgh, other locations that have received Rockefeller wood include Morris, New Jersey, and Bridgeport, Connecticut. Rehabilitating a home in this historic city can cost $150,000, though the subsidized costs to buyers are based on 30 percent of their income. Habitat for Humanity makes up the difference through fundraising.

Buyers also must contribute hundreds of hours of “sweat equity” by working alongside other Habitat for Humanity volunteers.

The Rockefeller wood is more symbolic than structural. That’s because the big Norway spruces that tower over skaters each December at Rockefeller Center are show trees, not work trees, with wood often too knotty to support a lot of weight. So Habitat volunteers use the special spruce strategically, as they did last week in Newburgh with 14-inch (35-centimeter) sections bracing floor joists in a gutted row house.

Several doors down, it was used to help frame in an interior wall. That house is ready for a move-in by Perez, her husband and their four children. Perez is a Jehovah’s Witness and does not celebrate Christmas, but she still showed the lone piece of still-visible stamped wood above a light switch to her toddler.

“Even though I don’t celebrate Christmas, it means a lot for me because it’s still nature,” she said.

Perez hopes to move in within a few months. By then, this year’s Rockefeller tree will be milled into planks headed to a yet-to-be-determined city for Habitat for Humanity.

“After it’s all said and done with, it’s going to somebody else’s house,” Smith says. “It makes me wonder how they’ll feel about that. Will they feel how I feel?”