Can you get through this Sharia law news without getting incredibly angry? - The Horn News 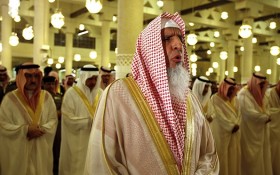 Yale Law School is taking foreign money and using it to establish what school officials hope will become the top center for the study of Sharia law in the world.

Sharia law carries weight in the legal code of most Muslim countries. Movements to expand Sharia laws influence have been controversial because many interpretations have been used to justify intolerance and harsh punishments. And in some countries, Sharia law is used to deny women rights to everything from voting to getting an education.

But Yale officials say the Abdallah S. Kamel Center for the Study of Islamic Law and Civilization reflects a growing interest in many American institutions in Sharia law, history and culture.

“The contemporary challenges of Islamic law are broadly relevant to political events throughout the entire Islamic world and those are developments that are watched by a much larger audience of people who in many cases have not much knowledge at all of the history and traditions if Islamic law,” said Professor Anthony Kronman, a co-director of the center who was first introduced to Kamel by a Yale Law graduate who works as an attorney for the Saudi businessman.

Kronman said Yale aims to have one of the best Sharia law program in the country, if not the world, and one objective is to ensure the center’s work is integrated into the life of the law school.