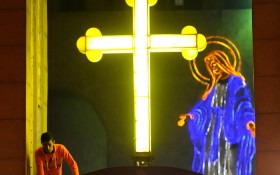 We’ve all heard the narrative – “Christianity is on the decline,” say the talking heads. But is it true? Not so fast, say the numbers!

According to the 2015 Pew Research poll that predicts religious trends, it’s atheism, not Christianity, that’s in trouble around the globe.

In fact, non-believers are set to lose big compared to Christianity in the next 40 years.

In fact, 40 million atheists are expected to convert to Christianity during the next 40 years.

And the religion is growing in many areas of the world outside of the United States. In Asia, the continent’s 350 million Christians are expected to number 460 million by 2025.

That’s just the beginning. On a global scale, the world’s population of Christians is expected to grow by leaps and bounds in the next 40 years, from an estimated 2.168 billion to 2.918 billion.

That’s an increase of nearly 750 million Christians in two generation. An easier way to think of that number is to imagine the growth of Christians to the entire United States population COMBINED. That’s the entire population of Los Angeles, New York City, Florida, Hawaii, and everywhere in between, all together.

Now, double that number…. Then add about hundred and ten million more.

Still think Christianity is on the decline? Well, if those numbers not compelling enough, the amount of unaffiliated religious people are expected to rise only slightly during that same time period, a modest 99 million.

In other words, the world is expected to gain seven times more Christian believers than non-believers in the next four decades.

Christianity is already currently the largest religion in the world, making up nearly 1/3rd of the world’s population, a position the numbers show the religion will maintain.

The demise atheists were so eager for seems like it’s going to be delayed for a long, long time.