Chris Christie on the warpath, goes after Rubio, Cruz - The Horn News 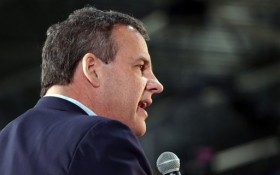 Republican presidential candidate Chris Christie says it’s time for voters to start getting serious about the election as they head into the new year.

The New Jersey governor returned to New Hampshire Saturday to kick off a four-day bus tour across the early-voting state, where he’s been drawing new interest and gaining in polls.

“It’s game time,” Christie told a crowd of supporters gathered in an Exeter automotive garage, where he made a dramatic entrance in a new silver bus, emblazoned with his name and tagline, as the theme song from Star Wars played.

“I’ve had a fun summer and fall. It’s been incredibly entertaining,” said Christie, running through a list of rivals that includes senators, current and former governors, and “a real character” — a shot at billionaire businessman and reality TV personality Donald Trump.

Christie, once seen as a top GOP contender, had struggled early on to stand out in a crowded field that includes former Gov. Jeb Bush and Sen. Marco Rubio of Florida as well as Trump, who has been sucking up most of the oxygen in the race.

But Christie has earned new attention from voters following the attacks in Paris and San Bernardino and after several well-regarded debate showings.

Christie painted himself Saturday as a tested leader with executive experience many of his rivals lack. He singled out two senators in the race — Rubio and Texas Sen. Ted Cruz — criticizing Rubio for missing Friday’s year-end budget vote.

“I mean, Senator Rubio, listen, if you’re going to say you’re opposed to something, how about showing up to work and voting no?” Christie asked in Exeter.

“He didn’t go to work!” Christie continued at an evening town hall in Bedford. Christie has faced criticism in New Jersey for the time he’s spent out of state.

Rubio’s spokesman said in a statement Friday that the senator was campaigning in Iowa. “Marco has consistently voted against those sorts of bills, but the truth is that it’s not going to change until we elect a new president,” spokesman Alex Conant said. “That’s why Marco is meeting voters in Iowa today.”

Christie also mocked his “buddy” Cruz for talking a tough game by threatening to carpet-bomb Syria while backing the USA Freedom Act, which ended the NSA’s bulk collection of phone records.

“That’s really tough talk,” Christie said. “Except this year, when it came time to decide whether we were going to give our intelligence community all the tools they needed to protect us against terrorism, Sen. Cruz voted to weaken America, to make America more vulnerable. He decided that it was more important to score political points than it was to protect the American people.”

Cruz argued during the last GOP debate that the current system is better than the one under the old Patriot Act because it includes cellphone records.

Christie, who was marking his 53rd day in the state, went on to compare his rivals to shiny new cars, saying they that haven’t proven themselves as he has as a prosecutor who took office not long after the 9/11 attacks and as New Jersey’s governor during Superstorm Sandy.

“I’m the old truck in the race, everybody,” said Christie, who argued he would be most prepared to take on Democratic front-runner Hillary Clinton if she wins.

“You want that old truck on stage, you want the truck that can go forward and go in reverse no matter how much mud she throws, because she’s going to be throwing the mud, you know it, that’s the Clinton playbook,” he said.

Christie was joined by Maine Gov. Paul LePage, whose re-election campaign Christie supported in his former role as chair of the Republican Governors Association.

Speaking at a campaign stop at The Halligan Tavern in Derry, Le Page said that, while Trump may be leading in the polls today, he expects Christie to vault ahead.

“Let me tell you the difference. This gentleman, Chris Christie, has been tried and proven,” said LePage. “Donald Trump has got great sizzle, but there’s no beef.”

Christie will be joined by Maryland Gov. Larry Hogan as he campaigns in the state on Sunday.