Blast off! United States and China kick off space race - The Horn News 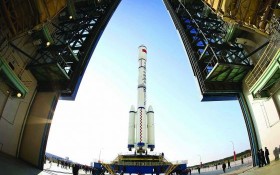 Is there a second space race coming? China has announced plans to further their space exploration.

Rising space power China is preparing to place a second experimental space station into orbit this year followed by a pair of astronauts who will dock with it and live on board for several days.

The government’s China Manned Space Agency said Sunday the Tiangong 2 space lab will lift off sometime after June. Shortly afterward, the Shenzhou 11 spacecraft will follow, the latest in a series of crewed Chinese missions that began in 2003.

Next year, the Tianzhou 1 cargo ship will be launched to dock with the Tiangong 2 and provide it with fuel and other supplies.

China launched Tiangong 1, its first space station, in 2011 and plans to construct a permanent station by 2022. China is planning a total of 20 space missions for this year.