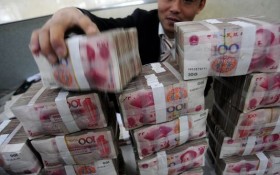 China surprised the world yesterday by deflating the value of its currency, and American economists aren’t fond of the aggressive move. Experts are saying this sneak attack may trigger a currency war, and the move will increase our trade deficit to China and kill thousands more American jobs.

Shock waves from Tuesday’s 1.9 percent devaluation against the U.S. dollar, which was the yuan’s biggest change in a decade, spread through financial markets today and caused stocks and Asian currencies to tumble.

“It is very possible that we could see a 10 to 15 percent drop in the exchange rate against the U.S. dollar in the next week or two,” said Duncan Innes-Ker of The Economist Intelligence Unit in a research note.

The change sparked complaints by US lawmakers who accuse Beijing of manipulating its currency to gain a trade advantage.

“This move may also trigger a new currency war” if central banks respond by trying to depress their country’s own exchange rates, said Nicholas Teo of CMC Markets in a report.

Until now, Beijing set the yuan’s value each day based on a basket of currencies that is believed to be dominated by the U.S. dollar. That meant the yuan rose with the dollar over the past year, hurting Chinese exporters. Exports in July fell by an unexpectedly steep 8.3 percent from a year earlier.

China’s economic growth has slowed to an annual rate of just 7 percent, which is healthy for most countries but far below the previous decade’s double-digit pace.

Beijing’s move will complicate the U.S. Federal Reserve’s decision about when to raise interest rates that have been near zero since the 2008 global financial crisis. The Fed was expected to act later this year.

A weaker yuan would reduce the price of Chinese goods, pushing down already-low U.S. inflation of 1.3 percent. The Fed wants to be “reasonably confident” inflation is returning to its 2 percent target before raising rates.