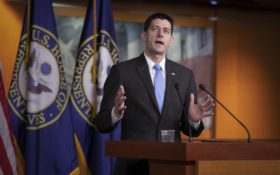 House Speaker Paul Ryan said Wednesday that a Democratic takeover of the House or Senate in November would lead to a stalemate in Congress while opening the way for partisan investigations of the Trump White House.

If either the House or the Senate flips party control, “what you’ll have is absolute gridlock,” said Ryan, R-Wis. “You’ll have subpoenas, you’ll have just the system shutting down.”

Ryan’s prediction of a potentially deeper partisan divide on Capitol Hill came during remarks at the Milken Institute Global Conference in Beverly Hills, where he also said the federal tax overhaul, regulatory rollbacks and job gains would be a selling point with voters.

In the House, Democrats would need to gain at least 23 seats to retake control. Republicans hold a 51-49 edge in the Senate.

Democrats have harshly criticized the Republican-led House Intelligence Committee, which concluded it found no evidence that President Donald Trump’s Republican campaign colluded with Russia in the 2016 presidential race.

Ryan said that a president’s party typically loses seats in midterm elections but that party data shows the GOP would hold the House if the election were now.

But he acknowledged that “there’s a great amount of enthusiasm on the other side of the aisle.”

He spoke favorably of Trump, calling him relentless and crediting him with shaking up the status quo in Washington.

However, he added comically : “I definitely could do with a few less tweets.”