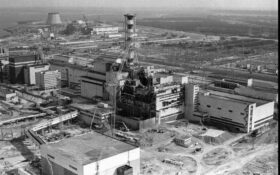 Scientists monitoring Chernobyl have spotted some ominous warning signs from deep within the remains of the site of the world’s worst nuclear disaster.

They say they’ve detected an alarming rise in neutron levels from a place so deep in the ruins that it’s currently unreachable.

And the world might have to brace for a new explosion.

“It’s like the embers in a barbecue pit,” Neil Hyatt, a professor of nuclear materials science and engineering at the University of Sheffield Lecturer, told Science magazine.

These “embers” could be a sign of fission reactions taking place in a location called subreactor room 305/2, which was seen in this haunting 1989 footage, shot just the years after the initial blast:

The Science magazine report says neutron levels inside the chamber have nearly doubled over 4 years.

Other spikes have appeared over the years, but most ultimately dropped.

In the past, they had been caused by rainwater seeping into the massive “sarcophagus” built over the ruins.

That water causes a reaction which leads to the neutrons, according to media reports. When it dries out, the levels return to normal, or at least what’s considering normal for a still-dangerous nuclear site

But scientists are alarmed because that shouldn’t be an issue anymore: A new structure completed in 2016 keeps the rain out… meaning this spike could have a different cause.

And it could point to signs of a new danger from deep beneath the still-smoldering ruins.

Hyatt told the magazine they’re concerned this new reaction won’t just fade away like those in the past but could instead accelerate exponentially, leading to “an uncontrolled release of nuclear energy.”

In other words, a new explosion at the site.

“There are many uncertainties,” Maxim Saveliev of the Institute for Safety Problems of Nuclear Power Plants told Science. “But we can’t rule out the possibility of [an] accident.”

The reactor first blew in 1986, when the site in Ukraine was part of the Soviet Union. The blast released 100 times the radiation of the atomic bombs dropped on Hiroshima and Nagasaki and caused the evacuation of nearby communities, including the city of Pripyat, all of which remain largely abandoned.

The zone remains unsafe for humans for extended periods of exposure, but has become an unlikely destination for adventure tourists, who spend a day or two in the nearby areas, snapping photos and taking videos to post online:

Ukraine has even asked for UNESCO to protect the site as a World Heritage location.

“We believe that putting Chernobyl on the UNESCO heritage list is a first and important step towards having this great place as a unique destination of interest for the whole of mankind,” Ukrainian culture minister Oleksandr Tkachenko told Reuters earlier this year. “The importance of the Chernobyl zone lays far beyond Ukraine’s borders… It is not only about commemoration, but also history and people’s rights.”

Something else unusual has happened in the zone in the decades since the blast: It’s now teeming with wildlife, although many contain signifiant genetic mutations, according to published research.

The Chernobyl Exclusion Zone is expected to remain unsafe for human habitation for about 20,000 years.

Scientists do not believe a potential new explosion would be on the scale of the initial accident, but would instead be more contained, especially given the massive structure built over the ruins.

However, it could cause parts of the protective structure to collapse and the release of more radiation… meaning it could be a lot longer than 20,000 years before Chernobyl is habitable again.