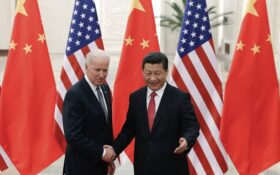 As America’s best athletes compete in Beijing, China, for the Winter Olympics, one of the nation’s leading law enforcement figures is warning of the unique threat Beijing poses to the United States.

“There is no country that presents a broader, more severe threat to our innovation, our ideas and our economic security than China does,” FBI Director Christopher Wray told NBC News.

Wray told the network that the FBI currently had 2,000 active cases against Chinese attempts to hack, steal and swindle U.S. tech and propriety information.

And the agency adds two more cases every day.

“This one blew me away,” he said. “And I’m not the kind of guy that uses words like ‘blown away’ easily.”

In another recent case, Chinese intelligence officer Xu Yanjun was convicted in a plot to steal high-tech secrets from an aviation company. He now faces up to 15 years in prison.

And in yet another notorious example, Chinese agents allegedly paid an employee of American Superconductor to get the company’s proprietary source code for operating wind turbines. The employee was convicted for bribery.

NPR’s Marketplace reported in December that the list of victims includes “solar and steel companies, makers of computer chips and airplanes, labs doing COVID-19 research, health care companies, universities — it goes on and on.”

Michael Orlando, acting director of the National Counterintelligence and Security Center, told Marketplace, “It is most certainly guided by the Chinese government.”

Wray said much the same this week, not only to NBC News but also to the Ronald Reagan Presidential Library in California.

“The harm from the Chinese government’s economic espionage isn’t just that its companies pull ahead based on illegally gotten technology,” Wray said. “While they pull ahead, they push our companies and workers behind.”

He also compared the Chinese threat today to the one presented by the Soviet Union decades ago.

Like the Soviet Union, the Chinese government “rejects the fundamental freedoms, basic human rights, and democratic norms we value as Americans.”

But unlike the Soviet Union, China makes products that are bought by Americans.

“The U.S. and today’s China are far more interconnected than the U.S. and the old U.S.S.R. ever were,” he said. “And China is an economic power on a level the Soviets could never have dreamed of being.”

Much of that power has come at the expense of the American businesses that have been victimized by Beijing, which he said has unleashed “a massive, sophisticated hacking program” on the United States in an effort to steal from across industries and meddle in government.

He said these attempts are “more brazen, more damaging than ever before” and that once the nation’s communist leaders decide to move in on an industry “they throw every tool in their arsenal at stealing that technology to succeed in those areas.”

Wray said one recent hack hit 10,000 companies at once.

“Just using cyber means, Chinese government hackers have stolen more of our personal and corporate data than every other nation combined,” he said.

Experts predict it will only get worse from here.

“Western businesses are thinking quarter-to-quarter, not 10 to 15 years down the road, which is where Chinese companies are,” Adam Meyers, senior vice president of intelligence at the cybersecurity firm CrowdStrike, told Marketplace.

“They’re willing to wait until 2049. They are patient, and that’s their secret weapon.”