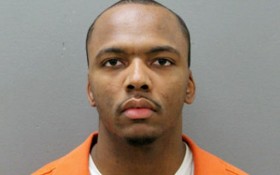 A Chicago man has been charged with first-degree murder, after police say he helped lure a 9-year-old boy into an alley with a juice box and then shot him in the head because of his father’s gang ties.

The fourth-grader was one of more than 400 homicide victims in the Chicago last year. But even in a city where children are all too often the innocent victims of relentless gang warfare, Tyshawn’s killing was shocking because, according to police, he was killed for no other reason than to punish his father.

Interim Police Superintendent John Escalante was scheduled to discuss the shooting and investigation later Tuesday. Guglielmi said the boy’s death was a calculated act by three men: Boone-Doty, 27-year-old Corey Morgan, and a third man, Kevin Edwards, who remains at large and who is believed to be hiding in Iowa, according to U.S. Marshals,

“The plan was to execute him in the park, but we learned there were too many people in the park so they lured him into an alley, promising him a juice box,” Guglielmi said, noting that they also told Tyshawn they were friends of his father.

Police say Tyshawn was targeted because of his father’s gang affiliation and a recent series of shootings between two rival gangs, the Gangster Disciples and the Black P Stones, in the Auburn Gresham neighborhood on Chicago’s South Side. Investigators believe that the boy was killed in retaliation for the Oct. 13 gang killing of Tracey Morgan, Corey Morgan’s 25-year-old brother.

Morgan has denied any involvement in the shooting.

It was not immediately clear Tuesday if Boone-Doty had an attorney who can comment on his behalf. Neither the Cook County State’s Attorney’s office nor the public defender’s office immediately responded to phone messages seeking that information.

Boone-Doty also is charged with murder in the Oct. 18 shooting death of 19-year-old Brianna Jenkins and attempted murder and aggravated battery in the wounding of Deshari Bowens, according to the state’s attorney’s office. Bowens, a 20-year-old man who is affiliated with a gang, was sitting in a car with Jenkins when she was killed.

Boone-Doty was paroled from the Illinois Department of Corrections in August after serving about two years on a five-year sentence in a drug case.