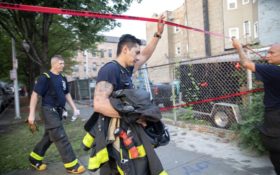 Eight people, including six children, were killed when a fire broke out before dawn Sunday at a Chicago apartment in one of the deadliest fires in the nation’s third-largest city in years, officials say.

Two other people were hospitalized in very critical condition, Chicago Fire Department spokesman Larry Merritt said. One of the children who died was an infant, according to Fire Commissioner Jose Santiago.

“We have not had this in many, many, many years — this amount of fatalities and injuries in one location,” he said.

A makeshift memorial along a nearby sidewalk included crosses for each child who died — a small Mickey Mouse doll set next to one. The Rev. Clifford Spears of Saint Michael Missionary Baptist Church led a crowd that gathered in prayer, the Chicago Tribune reported. A candlelight vigil was planned for Sunday night.

Officials had not released the names or ages of the victims, all of whom were in the same residence, Merritt said. The cause of the blaze hasn’t been determined.

A woman who saw the blaze as she was returning home from work alerted people and gave them a chance to escape, Santiago said. She called 911 around 4 a.m., then began knocking on doors in the largely Hispanic Little Village neighborhood on the city’s southwest side.

“So the female who did that saved a lot of lives,” Santiago said.

At least two buildings caught fire, one of them described by fire department officials as a coach house.

Video showed smoke coming from windows of a three-story building’s stone facade, with flames engulfing the back. Police officers helped push a stretcher toward an ambulance, while a paramedic simultaneously performed CPR. One woman lay on a street crying while someone tried to comfort her.

The fire was put out by just after 5 a.m., fire department officials said. At least one firefighter was injured and was hospitalized in good condition.

The American Red Cross planned to work with the Chicago Fire Department to canvass the neighborhood to ensure homes have functional smoke alarms installed, the CEO of the Chicago & Northern Illinois Red Cross, Celena Roldan, told the Chicago Sun-Times.