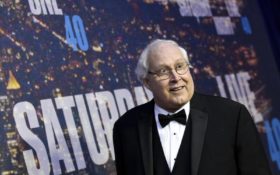 New York State Police say actor and comedian Chevy Chase was kicked in the shoulder during an altercation with another driver.

Police say the 74-year-old Chase was driving in South Nyack on Feb. 9 when he was cut off in traffic by a 22-year-old Long Island man. Authorities say the former “Saturday Night Live” star chased the other driver across the Gov. Mario M. Cuomo Bridge, before both pulled over.

Authorities say the driver and Chase got into a verbal argument, which led to a passenger in the car cursing at Chase and kicking him in the shoulder. The driver contends the kick was self-defense because Chase threw a punch first.