Cheney says, "I will no longer be a Republican," amid 2024 questions - The Horn News 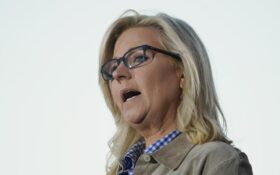 Rep. Liz Cheney, R-Wyo., is set to leave the House at the end of her current term after a humiliating 37-point loss in the Republican primary.

For the future, Cheney has been dropping hints about another run for office, perhaps even a presidential campaign.

But on the next ticket, she’ll likely drop the R next to her name.

On Saturday, Texas Tribune CEO Evan Smith bluntly asked Cheney, “Will you remain a Republican regardless of what happens in the next election?”

“I’m going to do everything I can to make sure Donald Trump’s not the nominee,” Cheney replied. “If he is the nominee then I won’t be a Republican.”

In the same interview, Cheney expressed openness to campaigning for Democrats.

Smith, the moderator, asked Cheney, “Does that include campaigning for Democrats if that’s what it takes [to stop certain Republican nominees?]”

Cheney made the remarks Saturday at TribFest in Austin, Texas. She has only three months left in her term. She could be working on a budget proposal in Washington, or she could be hosting town halls in Wyoming to hear her constituents’ concerns about pocketbook issues, like inflation.

Instead, Cheney is using the lame duck period to talk about her pet issues in front of Texans.

The congresswoman expressed her Trump derangement by comparing the former president to a leader of the Chinese Communist Party (CCP).

“We cannot afford to be a society where we’re tearing each other apart. That’s what our adversaries want us to be doing. Think about what the leaders of the Chinese Communist Party say about American democracy. They say our elections can’t really — they don’t work, they don’t reflect the will of the people. Those are the same thing Donald Trump says about our democratic process. And we have an obligation to make sure — and I certainly will do — whatever it takes to make sure Trump isn’t anywhere close to the Oval Office again,” Cheney said.

In March, Vice President Kamala Harris called certain voter integrity laws “undemocratic” and “un-American” during a speech in Alabama… and Cheney never compared her to a CCP leader.

Still, Cheney acknowledged the possibility of remaining a Republican in 2024. “I think we have to have a Republican Party that can be trusted to fight for” her pet issues like national security, she said.

Cheney refused to answer questions about a possible run for president, an unprecedented act for a politician coming off such a great failure at the ballot.

The moderator asked her, “If you determine between now and whatever point that the best way for you to keep him from winning the presidency again, is for you to seek it yourself, you’re holding open the possibility?”

“I will do whatever it takes to make sure he’s never near the White House,” she repeated, to laughter from the audience.

She added, “It’s really important not to just immediately jump to the horse race and to think about what we need as a country.”