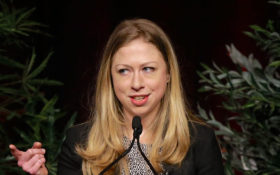 Chelsea Clinton has used her position as the daughter of Bill and Hillary Clinton to become rich. Really, really rich.

It pays well to be the daughter of Democratic insiders. In fact, Chelsea only had to show up to “work” a few times in 2018, and she was paid almost $600,000 — despite having zero experience or expertise in the fields she was in.

That’s according to recent SEC filing. At her position as a director on the board of InterActiveCorp (IAC), a media holding company, the former first daughter was paid $299,957 in stock and cash fees in 2018.

As a board member, she only had to show up to six meetings last year to get that payday — and that’s not all.

She also sits on the board of the travel company Expedia, where public records show her total compensation was $302,880 in 2018. She was paid just under $53,000 in cash — the rest was awarded in stocks.

Some members of the board of directors at Expedia were only obligated to attend two meetings that year.

Since being named to the IAC board at the tender age of 31, and the Expedia board a few years later, Chelsea has managed to rake in nearly $6.3 million in stock options.

How did she land such sweet gigs? How else.

“Those two companies are both headed up by the family’s good friend Barry Diller, the billionaire businessman and longtime partner of designer Diane von Furstenberg, who is often spotted attending Broadway shows with Chelsea and her parents,” The Daily Mail reported.

What does she do with the rest of her free time?

Even though she works eight days a year (backbreaking!), Chelsea also managed to find time to be a special political correspondent on NBC News in 2011… for an annual salary of $600,000.

Of course, Chelsea never had any on-air experience when she was hired, and only made appearances over the years totaling 58-minutes of airtime. She later left for a gig at her parent’s multi-million dollar foundation.

She also squeezes in some public speaking gigs for eyepopping paydays.

In 2015, for example, the University of Missouri at Kansas City paid $65,000 for Chelsea to give a short speech.

“That $65,000 was for a 10-minute speech, a 20-minute question-and-answer session, and an additional 30 minutes of posing for pictures with ‘VIPs’,” The Daily Wire reported.

FLASHBACK: The picture Chelsea Clinton HATES to see (remember this!?)