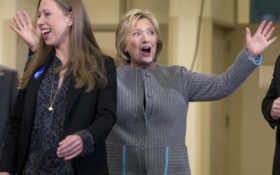 Mmost Americans love and admire our First Lady Melania Trump, but no one could have seen this coming — Chelsea Clinton has just publicly thanked Melania for her work at the White House.

That’s right. The Trump’s even count some of the corrupt Clinton family as admirers… and it reportedly has Hillary Clinton steaming mad.

While many liberals were spending their time bashing Melania for removing a dead tree on the White House lawn, Chelsea took note of the admirable decision Melania made.

Chelsea’s latest tweet is sure to make a lot of people angry — and her mother is taking the news especially hard, according to critics.

Earlier this week, it was announced that Melania had officially made the decision to cut down the historic Jackson Magnolia due to the damage it has suffered. Her decision was fully recommended and endorsed by the highest authority of tree experts in America.

That didn’t stop the mainstream media from attacking Melania, of course.

Melania’s involvement was to preserve the tree as best as possible. She requested to use the wood from the 200-year-old tree to be replanted in the same area.

“Mrs. Trump has asked that wood from the tree be preserved, and that seedlings be available if the opportunity to plant a new tree arises,” explained Stephanie Grisham, a spokeswoman for Melania.

Although so many idiotic leftists turned this innocent act into a controversy, Chelsea did not take their side — a surprising political statement that shocked establishment Democrats.

Thank you to all the Chief Horticulturists and everyone from the National Park Service who have taken care of the beautiful grounds of the @WhiteHouse over the years. Thank you @FLOTUS for preserving part of a tree I & so many have treasured. https://t.co/VwzM1qkCDA

Conservative Tribune said, “Hillary and the mainstream media ought to be paying attention: Even Chelsea Clinton can admit when a Trump is right once in a while.”

We are sure that Hillary is foaming at the mouth with anger right now.