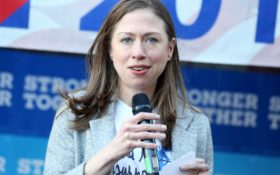 Since Donald Trump decided to run for president, the Trump family has lost millions of dollars, countless business deals, and endless hours of sleep—and now, one of them has lost a friend.

“I’ve not spoken to her since 2016,” Chelsea told interviewer Andy Cohen, “and I have no interest in someone who is not only complicit but actively taking part in this administration’s everyday collision of cruelty and incompetence.”

QUIZ: Which Liquor Is Better For Your Health? [sponsored]

The two First Daughters had been close before their parents ran against one another in the hotly contested 2016 presidential election. Now, Chelsea says, she considers Ivanka unworthy of her friendship.

“We were in touch at the beginning of the campaign” four years ago, Chelsea said. “But it’s just really hard when there’s someone who’s actively embracing their candidate—whether it’s their father or not— who is trafficking in racism and sexism and anti-Semitism and Islamophobia and homophobia and transphobia and conspiracy theories and lies, and is so fundamentally corrupt.”

Chelsea’s diatribe sounded like a full-fledged repeat of her mother’s “basket of deplorables” speech.

“You know, to just be grossly generalistic, you could put half of Trump’s supporters into what I call the basket of deplorables,” Hillary Clinton said in September 2016. “They’re racist, sexist, homophobic, xenophobic, Islamaphobic—you name it. And unfortunately there are people like that.”

Chelsea Clinton, who is now 40, had years of close ties with Ivanka Trump, 38, until the 2016 campaign really heated up.

In 2014, they took a picture smiling and embracing one another at the 2014 Glamour Women of the Year Awards.

A year later, Chelsea would defend Ivanka in Vogue magazine—saying Ivanka reminded her of her dad, former president Bill Clinton.

Chelsea said Ivanka’s ability to stay “aware of everyone around her” in some ways “reminds me of my dad, and his ability to increase the joy of the room.”

Their friendship seemed deep and mutual. Even while their parents were fighting like cats and dogs on the campaign trail in 2016, Ivanka Trump told People magazine she and Chelsea “have great respect for each other.”

After her mother’s shocking loss, Chelsea Clinton insisted she and Ivanka would remain BFFs.

#1 Food for Your Blood Pressure  [sponsored]

But political friction between Chelsea Clinton—whose political outlook is even more “Woke” than her mother’s—and the Trump family soon degraded the relationship.

In 2018, Clinton took their disagreement public, saying that it’s fair to criticize anyone who supports the Trump administration’s policies—including Ivanka.

Despite the buzz over Clinton’s newest interview, Chelsea actually announced she had pulled the plug on her friendship with Ivanka Trump in 2018.

“I have not spoken to her in a long time,” Clinton told Colbert, because “she has supported policies and decisions that I don’t agree with.”

The Chelsea-Ivanka fallout may be the most public breakup over politics, but it’s far from the only one.

One-in-four people who voted for Hillary Clinton in 2016 removed someone out of their social media circle because of their political views.

The Public Religion Research Institute found that Democrats are three times more likely to have “blocked, unfriended, or stopped following someone on social media” than Republicans.

And Democrats were five times more likely than Republicans to cut ties with friends in real life over politics.

“One little click to unfriend someone can give you so much satisfaction before you even step inside the ballot box,” a social worker from New York told MarketWatch.

For the last four years, Democrats haven’t had anything to smile about after they step out of the ballot box—especially members of the Clinton family.