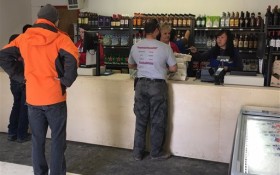 An Alaska town’s first liquor store in more than 40 years has opened, and the police chief there worries he won’t have enough officers to handle an expected spike in alcohol-related calls.

The AC Quickstop opened to a small crowd Tuesday in Bethel, a community of about 6,200 people in southwest Alaska that was founded by Yup’ik Eskimos. The new business is owned by Alaska Commercial Co., which has 31 stores in remote communities around the state.

The Bethel store had about 50 customers within the first hour of business, AC general manager Walter Pickett said. The company already has eight Alaska stores that sell alcohol, he said.

“We’re very aware of our accountability as a good citizen of the community,” he told The Associated Press in a phone interview. The Bethel store has full-time security staff, and its sales staff has been trained in alcohol sales, he said.

But Bethel Police Chief Andre Achee said he worries about having enough officers in his short-staffed department because of the easy access to alcohol. His department is budgeted for 15 sworn officers, but only six of those slots, including his, are filled. The challenge is finding people who want to live and work in an isolated community where the cost of living is exorbitant.

Scores of rural Alaska communities have long struggled with the effects of alcohol abuse. As a result, many are “dry” or “damp,” meaning locals have passed laws banning or restricting the sale of alcohol, where a 750-milliliter bottle can fetch up to $250.

In 2009, Bethel voters decided to lift a decades-long ban on liquor sales and remove monthly limits on alcohol shipments. That prompted counter efforts to ban bars and liquor stores in the town, but ultimately the majority rejected those restrictions the following year.

With the new business, alcohol — including hard liquor — is easier to come by.

Achee expects police calls to spike by this weekend as well as certain times of the year, such as shareholder dividend distributions from Alaska Native corporations. Even without a liquor store, police already respond to a jump in alcohol-related calls each October with the distribution to most Alaskans of the Alaska Permanent Fund Dividend from the state’s oil wealth account.

“With a liquor store here, it just becomes a lot easier,” he said. “It just makes it easier if people want to binge drink.”

Police, however, have had no calls involving Fili’s Pizza, which last month became the first establishment to sell alcohol by offering wine and beer on the menu, Achee said.