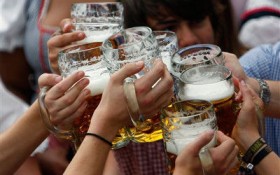 A customer has bought the first beer served legally in a rural upstate New York town in 80 years.

The Times Herald-Record of Middletown reports servers at the Eureka Market & Cafe poured the first beer sold in Neversink on Thursday since an eight-decade prohibition on alcohol was partially lifted last month.

Kenny Curry was the first to be served and had a pint of Trout Town Eagle IPA as about 20 supporters cheered.

Jennifer Grimes, the cafe’s owner, says she started a liquor license application the day after the vote passed. She led the push to allow the sale of alcohol in the Catskills town.