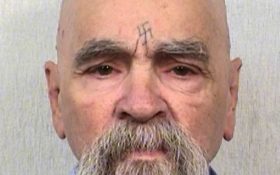 In the summer of 1969, a psychopath with a magnetic hold on young women sent some of his disciples into the night to carry out a series of gruesome killings in Los Angeles. In so doing, Charles Manson became the leering face of evil on front pages across America and rewrote the history of an era.

Manson, the cult leader who died of natural causes Sunday at age 83 after nearly half a century behind bars, orchestrated the slayings of pregnant actress Sharon Tate and six other people, butchered at two homes on successive August nights by intruders who scrawled “Pigs” and “Healter Skelter” (sic) in the victims’ blood. Monday he went to face God’s final judgement.

The slaughter horrified the world. To many, the collateral damage included the era of peace, love and flower power.

The Manson Family killings, along with the bloodshed later that year during a Rolling Stones concert at California’s Altamont Speedway, seemed to expose the violent and drug-riddled underside of hippies and sent a shiver of fear through America.

“Many people I know in Los Angeles believe that the Sixties ended abruptly on August 9, 1969,” author Joan Didion wrote in her 1979 book “The White Album.”

Manson was every parent’s worst nightmare. The short, shaggy-haired man with hypnotic eyes was a charismatic figure with a talent for turning middle-class youngsters into mass murderers.

“These children that come at you with knives, they are your children. You taught them; I didn’t teach them. I just tried to help them stand up,” he said in a courtroom soliloquy.

It was the summer of the first moon landing. War raged in Vietnam. Hippies flooded the streets of San Francisco and gathered in upstate New York for the Woodstock music festival. But many remember the time for Los Angeles’ most shocking celebrity murders.

Fear swept the city after a maid reporting for work ran screaming from the elegant home where Tate lived with her husband, “Rosemary’s Baby” director Roman Polanski. Scattered around the estate were blood-soaked bodies.

The beautiful 26-year-old actress, who was 8½ months pregnant, was stabbed and hung from a rafter in her living room. Also killed were Abigail Folger, heiress to a coffee fortune; Polish film director Voityck Frykowksi; Steven Parent, a friend of the estate’s caretaker; and celebrity hairdresser Jay Sebring, killed by Manson follower Charles “Tex” Watson, who announced his arrival by saying: “I am the devil, and I’m here to do the devil’s work.”

The next night, wealthy grocer Leno LaBianca and his wife, Rosemary, were stabbed to death in their home in another neighborhood.

Why he ordered the killing of strangers remained a mystery. Prosecutors said Manson wanted to foment a race war, an idea he supposedly got from a twisted reading of the hard-rocking Beatles song “Helter Skelter.” Others said he was getting even because music producer Terry Melcher, who once lived in the house Tate later occupied, had refused to record Manson’s music.

Manson’s childhood was a blueprint for a life of crime. He was born in Cincinnati on Nov. 12, 1934, to a teenager, possibly a prostitute. When he was 5, his mother went to prison for armed robbery. By the time he was 8, he was in reform school. He spent years in and out of penal institutions.

“My father is the jailhouse. My father is your system,” he said in a monologue on the witness stand. “I am only what you made me. I am only a reflection of you.”

Manson’s chaotic trial in 1970 transformed a courtroom into a theater of the absurd.

He and three female followers, Susan Atkins, Patricia Krenwinkel and Leslie Van Houten, sang and chanted, and Manson at one point launched himself across the counsel table at the judge. Many of his followers camped outside the courthouse, threatening to immolate themselves if he was convicted.

When Manson carved an “X″ in his forehead, his co-defendants did the same, saying they were “Xed out of society.” He later changed his “X″ to a swastika.

Despite the overwhelming evidence, he never apologized for the murders.

“I have killed no one, and I have ordered no one to be killed,” Manson said.

He and the three women were found guilty of murder and sentenced to death. Another defendant, Charles “Tex” Watson, was convicted later. All were spared execution and given life sentences after the California Supreme Court struck down the death penalty in 1972. Manson also was convicted in the killings of stuntman Donald “Shorty” Shea and musician Gary Hinman.

Manson and his female followers appeared sporadically at parole hearings where their bids for freedom were repeatedly rejected.

At a 2012 parole hearing Manson boycotted, he was quoted as telling a prison psychiatrist: “I’m special. I’m not like the average inmate. … I have put five people in the grave. I am a very dangerous man.” The parole board decided he should stay behind bars for at least 15 more years.

The killings inspired movies and TV shows, and Manson prosecutor Vincent Bugliosi wrote a best-selling book about the murders, “Helter Skelter.” Manson’s face has appeared on T-shirts. The macabre shock rocker Marilyn Manson borrowed part of his stage name from the killer.

“The Manson case, to this day, remains one of the most chilling in crime history,” prominent criminal justice reporter Theo Wilson wrote in her 1998 memoir, “Headline Justice: Inside the Courtroom — The Country’s Most Controversial Trials.”

“Even people who were not yet born when the murders took place,” Wilson wrote, “know the name Charles Manson, and shudder.”