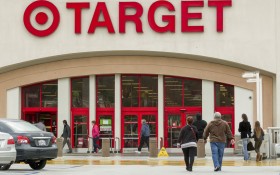 The store that’s near Fenway Park is part of Target’s effort to tailor merchandise to local preferences. In addition to the Boston store, Target is testing this strategy in 10 Chicago stores, with hopes to eventually expand chain-wide.

Target’s strategy is part of an effort to boost sales. The retailer, once known for its cheap but chic fashions and home decor, lost customers during the recession after focusing too much on expanding everyday grocery items like milk.

The retailer has since focused on adding trendier merchandise, and began stocking organic, gluten-free and other healthier foods. It’s also investing in technology to speed up online deliveries. So far, Target’s business is rebounding: It posted four straight quarters of increases in sales at stores that have been open for at least a year, an important retail measure.

Target’s localization strategy is seeing successes, too. At the Chicago stores where Target sells local craft beers, bistro tables and two-burner grills for apartment living, sales are higher than in the rest of the market. And at the Boston store, “Fan Central” is a top sales performer compared with other shops that sell fan merchandise across the chain.